U.S. President Barack Obama on Wednesday (March 23) showed off his dance moves by taking to the floor with a celebrated Argentine tango dancer. It was part of an official state dinner for Obama and wife Michelle, hosted by President Mauricio Macri. 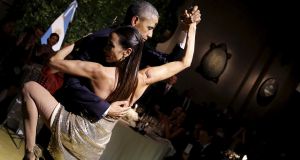 Republicans are frothing and comics are tweaking about the baseball diplomacy in Cuba and the tango diplomacy in Argentina, juxtaposed with the terrorist attack and manhunt in Brussels.

Rush Limbaugh accused the president of flamenco dancing and “doing the tango with women [who are] not even his wife”.

Yes, that outrageous sin of being polite to your foreign hosts at a state dinner.

Obama started off as a man self-consciously alone on stage and that’s how he is exiting.

He is, for better and worse, too cool for school. His identity is defined by his desire to rise above the fray. Unfortunately, he is in politics, which is the fray.

Obama shot to prominence at the 2004 Democratic National Convention with a rousing speech about boldly moving past our barriers – red and blue, black and white.

But those divisions are more pronounced than ever. So now he brings people together and gets things done when he can, like importing modernity to Cuba and inveigling China on climate change.

The president has a bristling resistance to what he sees as cheap emotion. (See: flag pin, 2008.)

That has led him, time after time, to respond belatedly or bloodlessly in moments when Americans are alarmed, wanting solace and solutions.

The Christmas bomber; the BP oil spill; James Foley being beheaded by Isis, the Paris attacks; the San Bernardino attacks; and now Brussels, which he discussed rationally and briefly with ESPN at the baseball game, wearing cool $485 Oliver Peoples sunglasses beside a cool Derek Jeter.

He feels that fanatics who are not an existential threat to us want to disrupt our lives and we should not let them; that more people die slipping in their bathtubs than in terrorist attacks.

That anthropological detachment – the failure to viscerally connect and vigorously persuade, the lip-curling at needy lawmakers, jittery Americans or anyone else who does not see things as he does – may keep him from being a Mount Rushmore president.

Obama went to a baseball game with Castro just 15 months into their working relationship.

It took him six years, with his trade Bill – one of his top foreign policy initiatives – on the line, to go to the congressional baseball game, toting some White House home brew.

If he were up for re-election, the president probably would have forced himself to appear more emotionally responsive to the terrorist attacks, urged on by his staff.

But he clearly feels liberated in the home stretch, relishing what he can do alone, venting privately about world leaders, lawmakers and pundits who have not risen to his lofty standards.

Once he read about FDR’s legislative prowess. Lately, he has been buffing up on Teddy Roosevelt blowing a raspberry at Congress and expanding executive power.

I travelled with the president to Havana to watch as he did the logical thing, bypassing the inane and antiquated congressional embargo to help move Cuba past its sepia arrested development.

There was a muted excitement in repressed Havana around the low-risk trip, a precursor to opening the Cuba wing in the Obama presidential library.

Obama, with his elegant family along, deftly manoeuvered in the chaos of communism, charming the 84-year-old Raúl Castro even though the White House did not know which bits of historic pageantry the Cuban would play along with.

After months of intense negotiations, the dictator told the president at the last minute that he would do a news conference – the first anyone could remember in Cuba.

But clearly Castro had not been briefed that the two American journalists’ multi-part questions would include tart ones for him.

Standing at a lectern flanked by plush burgundy drapes with “RP” embossed in gold on them in the Revolutionary Palace – which sounds like an oxymoron – Castro bridled when Andrea Mitchell asked him about human rights.

Afterward, Latin correspondents noted that if Mitchell were not American, she would be spending the afternoon in jail.

When the Cubans bobbled a photo op at the José Martí memorial in Revolutionary Square, Obama took over and directed the group to its picture in front of a Che Guevara mural.

He was a long way from 2008, when a Fox TV channel in Houston blew up a story about an Obama volunteer who had the unpatriotic temerity to have a Cuban flag with a picture of Che at her desk.

Conservatives then were trying to smear Obama as a socialist. Now many Democratic voters, especially young ones, are disappointed that Obama wasn’t liberal enough and are gravitating toward a real socialist rather than the president’s preferred successor.

Obama is trying to untangle the Gordian knots in a Middle East shattered by his predecessor; it was W’s unwarranted invasion of Iraq that unwittingly created Isis, as the veteran war correspondent Michael Ware points out in his new movie, Only the Dead.

The president can go to a ballgame and still keep his eye on the ball.