Man held after killing one and injuring three in Seattle college 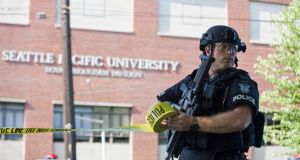 A policeman secures the scene at Seattle Pacific University after the campus was evacuated due to a shooting in which one person was killed and three injured. Photograph: David Ryder/Reuters.

A lone gunman armed with a shotgun and a knife opened fire in a Seattle university building, killing one person before a student subdued him with pepper spray as he tried to reload.

A student building monitor at Seattle Pacific University disarmed the gunman after he entered the foyer at Otto Miller Hall and several other students jumped on him and pinned him down until police arrived.

A 19-year-old man died at Harborview Medical Centre and three other people were taken to hospital, including a critically injured 20-year-old woman who underwent surgery, hospital spokeswoman Susan Gregg said.

A 24-year-old man and a 22-year-old man were in a satisfactory condition and Ms Gregg said one of those two was not shot.

At a news conference today, assistant police chief Paul McDonagh said the suspect in custody was “approximately 26 years of age” and was not a student at the university in Washington state.

The shooting came a week before the end of the school year and the situation was particularly tense when police initially reported that they were searching for a second suspect. They later said no one else was involved.

The university locked down its campus for several hours and told students and staff to stay inside. Some students were taking final exams in the building the targeted by the shooter.

“We’re a community that relies on Jesus Christ for strength, and we’ll need that at this point in time,” said Daniel Martin, Seattle Pacific University’s president.

People packed the First Free Methodist Church on the campus hours later for a service of prayers and song.

About 4,270 undergraduate and graduate students attend the private Christian university. Its 40-acre campus is in a leafy residential neighbourhood about 10 minutes from central Seattle. The school cancelled classes and other activities for today.

Jillian Smith (20) was taking a maths test on the second floor of Otto Miller Hall when a lockdown was ordered.

She heard police yelling and banging on doors in the hallway. The professor locked the classroom door, and the 20 or so students sat on the ground, lining up at the front of the classroom.

“We were pretty much freaking out,” said Ms Smith. “People were texting family and friends, making sure everyone was OK.”

The gun violence follows a spate of recent shootings on or near college campuses.

Last month Elliot Rodger killed six people and injured seven before turning his gun on himself in a rampage in Isla Vista, California, near two universities.

Seven people were killed and three injured when a 43-year-old former student opened fire at a tiny Christian school, Oikos University, in Oakland, California, in 2012. A gunman killed five people and injured 18 when he opened fire in a Northern Illinois University lecture hall in 2008.

Seattle mayor Ed Murray, noting previous mass shootings in the city, said: “Once again the epidemic of gun violence has come to Seattle.”