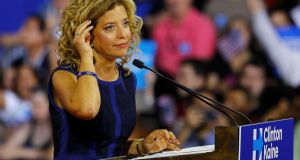 Democratic national committee chairwoman Debbie Wasserman Schultz, who is to resign, speaking at a Clinton rally in Miami on Saturday. Photograph: Scott Audette/Reuters

As Democrats arrive in Philadelphia to foster internal unity and introduce the party’s presidential ticket, a leak of internal emails has disrupted plans.

Debbie Wasserman Schultz, chairwoman of the Democratic national committee (DNC), will not speak at the party’s four-day convention, which begins on Monday, or chair the gathering after emails emerged questioning the organising committee’s independence during the party’s hard-fought primary election.

The emails confirmed the complaints of Vermont senator Bernie Sanders and his campaign team during the primary that the party was opposed to his candidacy and sought to stack the race against him, favouring his rival Hillary Clinton to be the party’s presidential nominee.

In a statement on Sunday night, Mr Sanders said: “Debbie Wasserman Schultz has made the right decision for the future of the Democratic Party. While she deserves thanks for her years of service, the party now needs new leadership that will open the doors of the party and welcome in working people and young people.

“The party leadership must also always remain impartial in the presidential nominating process, something which did not occur in the 2016 race.”

Among almost 20,000 emails published by Wikileaks was a message sent by DNC chief financial officer Brad Marshall seeking to undermine Mr Sanders by suggesting that the party “get someone to ask” the Democratic presidential candidate about his religious beliefs.

“He had skated on saying he has a Jewish heritage,” he wrote without mentioning Mr Sanders in the email (though he was the only Jewish candidate running in the election). “I think I read he is an atheist. This could make several points difference with my peeps. My Southern Baptist peeps would draw a big difference between a Jew and an atheist.”

While Mr Sanders gave Mrs Clinton a ringing endorsement at a rally in New Hampshire almost two weeks ago – helping to bring two divided camps of Democrats together for the general-election battle against Republican nominee Donald Trump – the Vermont senator had called for Ms Wasserman Schultz, a congresswoman from Florida, to stand down as chairman of the DNC over the committee’s apparent impartiality in the primary election.

US congresswoman Marcia Fudge, a Democrat from Ohio, has already taken over Ms Wasserman Schultz’s gavelling duties, opening and closing convention proceedings. The controversy has the potential to reopen old wounds within the rival camps on the eve of the convention.

“It is an outrage and sad that you would have people in important positions in the DNC trying to undermine my campaign. It goes without saying the function of the DNC is to respect all of the candidates, to be fair and even-minded,” Mr Sanders told CNN.

Mr Sanders (74), who ran a closer-than-expected race against Mrs Clinton (68) with a populist campaign that electrified grassroots liberals, is among the first speakers at the convention, speaking on the theme “United Together” in Philadelphia on Monday.

Mrs Clinton will formally accept the Democratic presidential nominee in her keynote address on Thursday night, making her the first female candidate to stand for a major political party in the history of the United States. The location of her speech in the birthplace of the country will add to the historical significance of the landmark political moment.

Mrs Clinton’s campaign manager Robby Mook accused “Russian state actors” of leaking the emails to help Mr Trump, who has described himself as an admirer of Russian leader Vladimir Putin. “Last week we saw that Trump made changes to be more pro-Russian and when you put all this together [it] is disturbing,” he said, referring to the Trump campaign’s removal of proposals from the Republican policy platform to arm Ukraine to fight Russia and rebel forces.

Mr Trump has rejected calls during his campaign to support Ukraine in fighting Russian-led separatists. Paul Manafort, Mr Trump’s campaign chairman, has worked as a lobbyist for Russian-backed former Ukrainian president Viktor Yanukovich for more than a decade.

In response to the controversy around the DNC emails, Mr Trump sought to sow dissent within the Democratic camp. He trolled Mr Sanders, whose supporters he is trying to flip to his campaign, in a series of tweets. There was no longer a Sanders “political revolution”, he said, adding that Mr Sanders had turned out “to be a weak and somewhat pathetic figure”.

“Sorry folks, but Bernie Sanders is exhausted, just can’t go on any longer. He is trying to dismiss the new emails and DNC disrespect. SAD!” the billionaire tweeted.