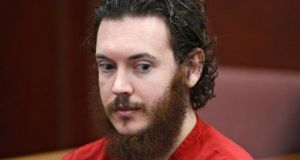 James Holmes: the 27-year-old former neuroscience graduate student was found guilty last month on all charges from the July 2012 mass shooting in the Denver suburb of Aurora. Photograph: Reuters

Colorado movie rampage gunman James Holmes was spared the death penalty and will serve life with no parole for killing a dozen people and wounding 70 inside a packed midnight screening of a Batman film three years ago, the jury in his murder trial has found.

The panel of nine women and three men found the 27-year-old guilty on all counts last month.

They were not unanimous, however, on the death penalty, which means Holmes receives an automatic life sentence with no possibility of parole.

The jurors reached a verdict on Friday after watching a video of the body-strewn cinema recorded after the massacre .

The jury already convicted the former neuroscience graduate student on all charges from the July 2012 mass shooting in the Denver suburb of Aurora.

The panel then had to decide if Holmes would be executed, or serve life with no chance of parole.

Arapahoe County district court judge Carlos Samour earlier granted the panel’s request for a television and DVD player so they could watch a 45-minute crime scene video from the cinema that was played during the trial.

The judge granted the request over the objections of the defence, but told the jury they could only view the video once.

The proceedings against Holmes began in late April and reached penalty phase closing arguments on Thursday after 60 days of trial, 306 witnesses, and the introduction of nearly 2,700 pieces of evidence.

In his speech to the jury, district attorney George Brauchler said justice for Holmes meant execution for the “horror and evil” he wrought inside the crowded cinema.

During the trial, dozens of wounded survivors testified about how they had tried to hide from the gunman’s hail of bullets, some of them steel-penetrating rounds, or stumbled over the bodies of loved ones as they tried to flee.

Defence lawyer Tamara Brady asked jurors whether they were ready to sign the death warrant of a mentally ill person and said that they would have to live with the decision for the rest of their lives.

While the jury has already rejected Holmes’ plea of insanity, Ms Brady said all the doctors the panel had heard from in court had agreed that he was seriously mentally ill.

Holmes has remained mostly expressionless throughout the trial, occasionally turning to look when a photograph of himself appears on a court television.

The defence says he suffers schizophrenia, and that his “aloof or distracted” demeanor is caused by anti-psychosis drugs that treat, but do not cure, the disease.

Holmes, who had no previous criminal record, bought a ticket for the screening of The Dark Knight Rises before slipping out to his car behind the building and changing into what prosecutors called a “kill suit” of ballistic helmet, gas mask and head-to-toe body armor.

He returned and threw a teargas canister into the cinema, then opened fire with a semiautomatic rifle, pump action shotgun and pistol.

Holmes has declined to testify in his own defence, or to make an allocution statement to the jury.

But the panel did watch more than 22 hours of Holmes speaking to a court-appointed psychiatrist in a videotaped sanity examination.

In the video, Holmes confirmed most of the details of the mass shooting, including his weapons purchases and his plan to draw police and other first responders away from the cinema by rigging his apartment with homemade explosives. Reuters