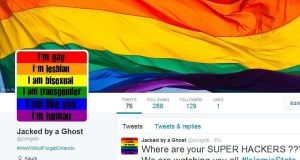 Hacking collective: Anonymous began its war on Islamic State in 2015 when it took control of almost 100 Twitter accounts following the ‘Charlie Hebdo’ attacks in Paris

Anonymous has launched another wave of hacking attacks against Islamic State, taking over social media accounts associated with the group and giving them an LGBT-inspired makeover.

The loose hacking collective, which grew out of the infamous 4Chan forum in the late 2000s, announced its war on Islamic State in 2015, taking control of almost 100 Twitter accounts following the Charlie Hebdo attacks in Paris that year.

Now, after the murder of 49 people in a gay club in Orlando, Florida, a hacker who goes by the name WauchulaGhost says he has taken control of more than 200 accounts belonging to supporters of Islamic State, the group also known as Isis. This time, rather than simply lock the users out of the accounts or report them to Twitter, the cybervigilante has given the accounts a gay-friendly makeover.

While some of the hacked accounts are now suspended by Twitter, three are still online, and apparently still under the control of WauchulaGhost.

Speaking to CNN, he explained his motivation: “You had all those innocent lives lost. I just felt there’s something I could do against the Islamic State to defend those people.”

It’s likely to be more useful than the last Anonymous operation to target Islamic State, however, which involved spamming Isis-related hashtags with videos of Rick Astley’s song Never Gonna Give You Up – a long-established internet prank known as “Rickrolling”.