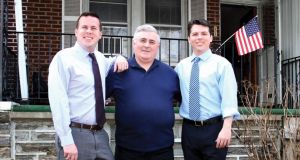 Brendan Boyle (right) with his brother Kevin, a fellow member of the Pennsylvania House of Representatives, and their father, Frank, who is from Donegal

Most eyes will be on the Senate, where Democrats are predicted to lose their majority, when Americans vote in the midterms on Tuesday.

There is less focus on the House of Representatives, which is likely to slip deeper into Republican control, weakening Democratic chances of winning back the House in 2016.

Two House races next week are of particular Irish interest. They both cover parts of Philadelphia’s suburbs and beyond: New Jersey’s 3rd Congressional district and Pennsylvania’s 13th district and involve two maiden runs for Congress.

In New Jersey, Democrat candidate Aimee Belgard comes from strong Irish stock. There are Kellys, Brogans and Scullys in her family, she says. She grew up singing and listening to Irish songs at the encouragement of a “feisty” Irish mum and spent an exchange year at the University of Limerick in the mid-1990s.

Her grandfather’s family emigrated from Rathgar in Dublin. Her family story goes that his father (her great-grandfather) had a problem with the drink and the mother insisted on moving to the US or Australia.

They chose the US, thinking that prohibition would keep old Kelly on the dry. But by the time they landed prohibition had ended and they eventually set up home in Philadelphia, just across the road from a bar.

Belgard competed as an Irish dancer until her youngest child was born nine years ago. While studying in Limerick she and her Irish housemates engaged in an unlikely reversal of roles – they brought her country line- dancing and she encouraged them to try Irish dancing.

After losing her parents to cancer – her father was a veteran of the Vietnam War, where he was exposed to the chemical Agent Orange – she served on the national board of the American Cancer Society Cancer Action Network. Meeting lawmakers in New Jersey’s state capital, Trenton, and Washington gave her an appetite for public service.

“After years of meeting with legislators – and realising that these folks are not celebrities; they are there to work for us – I decided that I was tired of asking other people to make the right decision; I decided that I would get involved myself,” she says.

Belgard (40) is in a tough race to beat GOP rival Tom MacArthur in a Republican- leaning district that stretches from the Philly suburbs to the Jersey shore. The seat is open after two-term Republican Jon Runyan, a former American footballer, decided not to seek re-election.

MacArthur, a self-made businessman, has spent three times as much on his campaign as Belgard, investing $5 million of his own money. “He is now the largest self-funder in the entire country,” she said.

Like many of the 159 other female candidates running for seats in the House on Tuesday, she has campaigned on equal pay for women.

She is proud to be running in the home district of the famous suffragist Alice Paul, leader of the 1910s campaign that led to the 19th amendment to the US constitution, giving women the vote in 1920.

Another ceiling could be broken if Hillary Clinton runs for president in 2016. “America is ready for a woman president,” she said.

West of the Delaware, fellow Democrat Brendan Boyle, the son of a Donegal emigrant and a member of Pennsylvania’s House of Representatives, is performing strongly in the polls against Republican Dee Adock in a heavily Democratic district that covers northern Philadelphia. If elected, Boyle (37) would be the only member of Congress with an Irish-born parent.

He secured a big win in the party’s primary in May by beating former congresswoman Marjorie Margolies, Chelsea Clinton’s mother-in-law. He overcame big money-spinning canvassing by the Clintons for Margolies.

Afterwards, despite beating his relative, Boyle received an unexpected call from the former president. Clinton told him he was impressed with his campaign – how Boyle used the working class story of his father, a native of Glencolmcille in the Donegal Gaeltacht, as a janitor on the Philadelphia transit system to win over voters.

“He even said to Hillary that that was really smart,” said Boyle.

Clinton spoke at length with him about the general election, sharing advice on how to appeal to middle-class voters. “That was pretty stand-up of him,” he said of Clinton taking time to telephone him.

If elected, Boyle would like to get on the House foreign affairs committee to help maintain an active US interest in Northern Ireland.

“I feel deeply and per- sonally about the peace process and an active, engaged US role is one of the necessary ingredients,” he says.

At home, Boyle and his brother Kevin are the only two brothers to serve simultaneously in the 332-year history of Pennsylvania’s House of Representatives. Might they both be interested in higher office, in the US Congress, like some other famous Irish-American brothers?

“The tradition in rural Ireland is the older brother gets the farm, so he got to run,” says the younger Kevin.

Watch on Tuesday to see if Brendan gets the farm.