Ireland among nations where Snowden is seeking asylum 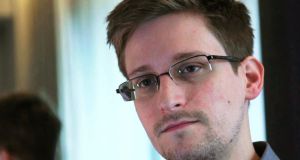 Edward J. Snowden, the fugitive former US security contractor, has sought asylum in a host of countries, including Ireland, according to the anti-secrecy group Wiklileaks. Photograph: REUTERS/Glenn Greenwald/Laura Poitras/The Guardian.

Edward J. Snowden, the fugitive former US security contractor, has sought asylum in a host of countries, including Ireland, according to the anti-secrecy group Wiklileaks.

A spokesman for the Department of Justice said that Irish legislation stated that an asylum application can only be accepted from a person who has landed in or is within the State.

It is understood the Irish embassy in Moscow this morning received a letter from Mr Snowden apparently outlining his wish to seek asylum in Ireland. Irish law prohibits the authorities here from commenting on individual cases.

Mr Snowden, wanted by US authorities for leaking information about a huge spying programme, appeared to break his silence yesterday for the first time since he flew to Moscow eight days ago.

He has withdrawn his Russian asylum request because of the demand from president Vladimir Putin that he stop harming US interests by leaking secret documents.

Ecuador’s president Rafael Correa told the Guardian in an interview published today that his country isn’t considering Mr Snowden’s request and said it was a “mistake” to have granted the fugitive a safe-conduct pass that allowed him to leave Hong Kong for Moscow.

WikiLeaks issued a statement attributed to Mr Snowden that denounced president Barack Obama for revoking his passport, opposing his asylum requests and leaving him a “stateless person.”

The statement posted on the website of WikiLeaks, which has been assisting Mr Snowden, also accused Mr Obama and the US government of seeking to intimidate him and deceive the world because of his disclosures about the vast global surveillance efforts of US intelligence agencies.

The statement attributed to Mr Snowden cited Mr Obama’s assertion last week that he would not permit any diplomatic “wheeling and dealing” with other countries that might wish to grant him asylum. Nonetheless, it said, vice president Joe Biden had been pressuring “the leaders of nations from which I have requested protection to deny my asylum petitions.”

“Although I am convicted of nothing, it has unilaterally revoked my passport, leaving me a stateless person. Without any judicial order, the administration now seeks to stop me exercising a basic right. A right that belongs to everybody. The right to seek asylum.”

He added: “I remain free and able to publish information that serves the public interest...No matter how many more days my life contains, I remain dedicated to the fight for justice in this unequal world. If any of those days ahead realise a contribution to the common good, the world will have the principles of Ecuador to thank.”

A later post, which appeared early today on the WikiLeaks website, said Sarah Harrison, the group’s legal adviser in the Snowden matter, had “submitted by hand a number of requests for asylum and asylum assistance on behalf” of Mr Snowden to 19 countries. They were listed as Austria, Bolivia, Brazil, China, Cuba, Finland, France, Germany, India, Italy, Ireland, the Netherlands, Nicaragua, Norway, Poland, Russia, Spain, Switzerland and Venezuela.

The Norwegian foreign ministry this morning confirmed the request had been received.

The post said the requests, which “outline the risks of persecution Mr. Snowden faces in the United States, ” were delivered to an official at the Russian Consulate at the Moscow airport where, according to Russian officials, Mr Snowden is ensconced in an international transit lounge, trying to determine his next step, and has technically not entered Russian territory. It said the consulate had started delivering the requests to the relevant embassies in Moscow.

The statement attributed to Mr Snowden appeared to be the first direct word from him about his predicament since his flight to Moscow from Hong Kong on June 23rd despite a US request to the Hong Kong authorities to arrest Mr Snowden, who is accused of violating espionage laws.

His disclosures have embarrassed the Obama administration and caused tensions with other countries, including China, Russia and members of the European Union.

Mr Snowden, 30, has still not been publicly seen in Russia, and there was no way to immediately verify that he had made the statement attributed to him.

The statement came as Snowden’s case appeared to be causing tensions between the government of Ecuador and Julian Assange, the WikiLeaks founder. Mr Assange has been camped out in Ecuador’s Embassy in London for more than a year, given asylum there to avoid extradition to Sweden, where he is wanted for questioning on allegations that he sexually assaulted two women.

“The conduct of Assange has bothered me a little and this morning I spoke with the foreign minister to tell him not to speak about our country’s situations,” Mr Correa said yesterday.

He was apparently displeased by comments Mr Assange made Sunday on the ABC program “This Week” regarding Mr Biden’s telephone call. Mr Assange characterized that call as an effort to pressure Mr Correa. “What does he know about the call from Joe Biden?” Mr Correa was quoted as saying.