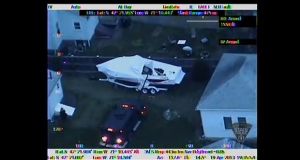 An image from a video released by Massachusetts police of a remote-controlled robot lifting the tarpaulin on a boat in which the badly injured Dzhokhar Tsarnaev was found on Friday night. 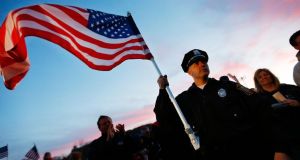 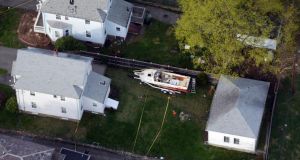 Investigators work around the boat where Dzhokhar Tsarnaev was found hiding in the backyard of a house on Franklin Street in Watertown, Massachusetts. Photograph: Darren McCollester/Getty Images 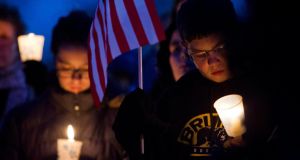 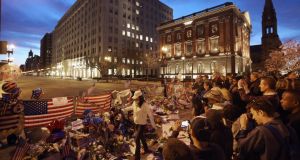 People gather at a makeshift memorial for victims near the site of the Boston Marathon bombings at the edge of the still-closed section of Boylston Street last night. Photograph: Mario Tama/Getty Images

Boston mayor Tom Menino has said the authorities may never be able to question the Boston Marathon bombing suspect, who lies seriously injured and unable to speak after having eluded police for 24 hours after a violent standoff.

Dzhokhar Tsarnaev (19), was in "very serious" condition at a Boston hospital after being captured on Friday night, Menino told ABC's This Week programme.

"And we don't know if we'll ever be able to question the individual," he said, without elaborating.

Tsarnaev's brother, Tamerlan (26), was killed in a firefight with police earlier on Friday as officers hunted them for the twin blasts on Monday that killed three and injured 176.

US Senator Dan Coats, a member of the Intelligence Committee, said it was questionable whether Tsarnaev would be able to talk again.

"The information that we have is that there was a shot to the throat," Coats told the ABC programme.

"It doesn't mean he can't communicate, but right now I think he's in a condition where we can't get any information from him at all," said Mr Coats, an Indiana Republican.

People across the Boston area had breathed easier after the 19-year-old college student was pulled, wounded and bloody, from a boat in a Watertown backyard on Friday night.

He is apparently too ill to be interrogated by investigators trying to establish the motive for the deadly attack and the scope of the plot.

Massachusetts police have released a video showing Dzhokhar Tsarnaev hiding in the boat before his capture. The video, shot by thermal imaging camera in a helicopter, shows a remote-controlled robot approaching the boat and lifting the tarpaulin under which the badly injured fugitive was sheltering. A number of what appear to be stun grenades were then thrown into the boat.

There was no immediate word on if or when Tsarnaev might be charged and what those charges would be.

The twin bombings on Monday killed three people and wounded more than 180. The most serious charge available to prosecutors would be the use of a weapon of mass destruction to kill people.

President Barack Obama said there are many unanswered questions about the bombing, including whether the Tsarnaev brothers - ethnic Chechens from southern Russia who had been in the US for about a decade - had help from others.

The older brother had been brought to the attention of the Federal Bureau of Investigation two years ago by a foreign government concerned he held extremist Islamist beliefs, the agency said in a statement. A law enforcement official identified the government involved as that of Russia. The FBI said it found no evidence of terrorist activity at the time.

The new FBI-led inquiry is paying close attention to a six- month trip Tamerlan Tsarnaev took shortly afterwards to Chechnya and neighbouring Dagestan, both regions of Russia that have been embroiled in Islamist separatist movements.

US officials earlier said an elite interrogation team would question the teenager without first advising him of his right to remain silent and the right to a lawyer.

This exception to issuing the warning known as the Miranda rule usually given to criminal suspects is allowed on a limited basis when the public may be in immediate danger - such as instances in which bombs are planted and ready to go off.

The American Civil Liberties Union expressed concern about invoking the exception. Executive director Anthony Romero said the exception applies only when there is a continued threat to public safety and is “not an open-ended exception” to the Miranda rule.

The public defender’s office in Massachusetts has agreed to represent Tsarnaev once he is charged.

Miriam Conrad said he should have a lawyer appointed as soon as possible because there are “serious issues regarding possible interrogation”.

“I, and I think all of the law enforcement officials, are hoping for a host of reasons the suspect survives,” Mr Patrick said after a ceremony before a baseball game at Fenway Park to honour the victims and survivors of the attack. “We have a million questions, and those questions need to be answered.”

The all-day manhunt on Friday brought the Boston area to a near standstill and put people on edge across the metropolitan area.

The break came around nightfall when a homeowner in Watertown saw blood on his boat, pulled back the tarpaulin and saw a bloody Dzhokhar Tsarnaev hiding inside. After an exchange of gunfire, police negotiated his surrender and he was seized and taken away in an ambulance.

Raucous celebrations erupted in and around Boston, with chants of “USA! USA!”

Residents flooded the streets in relief four days after the two pressure-cooker bombs packed with nails and other shrapnel went off.

“Tonight, our family applauds the entire law enforcement community for a job well done, and trust that our justice system will now do its job,” said the family of eight-year-old Martin Richard, who died in the bombing.

Investigators have not offered a motive for the Boston attack. But in interviews with officials and relatives and acquaintances of the Tsarnaev brothers, a picture has emerged of Tamerlan as someone embittered towards the US and increasingly vehement in his Muslim faith.

The Russian FSB intelligence security service reportedly told the FBI in 2011 about information that Tamerlan was a follower of radical Islam.

The FBI said it interviewed Tamerlan and relatives, and did not find any domestic or foreign terrorism activity. The bureau said it looked into his telephone and online activity, his travels and his associations with others.

More than 50 victims of the bombing remain in hospital, three in critical condition.