US Presidential candidate Donald Trump says Britain would be better off outside the European Union and he would probably vote to leave the trading bloc. Video: Reuters 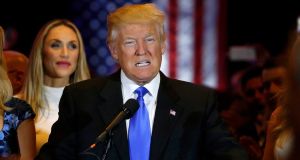 Republican US presidential candidate and businessman Donald Trump, when asked by Piers Morgan about British prime minister David Cameron’s view of his proposal to bar Muslims from the US as “divisive, stupid and wrong”, said “it looks like we’re not going to have a very good relationship”. File photograph: Lucas Jackson/Reuters

Presumed Republican presidential nominee Donald Trump has hit back at his critics by saying he was “not stupid” in response to remarks by British prime minister David Cameron, and rubbishing a newspaper article about his relationship with women.

Asked by ITV’s Piers Morgan about Mr Cameron’s view of his proposal to bar Muslims from the US as “divisive, stupid and wrong”, Mr Trump said “it looks like we’re not going to have a very good relationship”.

“Number one, I’m not stupid, OK? I can tell you that right now - just the opposite,” he told Morgan.

“Number two, in terms of divisive, I don’t think I’m a divisive person. I’m a unifier - unlike our president now, I’m a unifier.”

The New York billionaire called for a “total and complete shutdown of Muslims entering the United States” in December after it emerged that one of the two Muslim attackers in a mass shooting that killed 14 people in San Bernardino, California, had entered the country on a fiancée visa through her husband, a US citizen.

Mr Trump has recently played down the proposal, one of the most contentious during his campaign, saying the ban was “just a suggestion”.

In his interview on ITV, the property developer called London’s new mayor Sadiq Khan “very rude” after he described Mr Trump’s remarks on Islam as “ignorant” and said he hoped Mr Trump would lose the election in November.

“Tell him I will remember those statements – they’re very nasty statements,” he said.

The billionaire, who became the presumptive Republican nominee two weeks ago after the last of 16 opponents for the party’s nomination ended their presidential bids, is attempting to discredit a damaging 5,000-word New York Times article published at the weekend that showed he has objectified women over four decades.

Former model Rowanne Brewer Lane, one of the women interviewed by the newspaper, called the article “completely misleading” and told CNN she had “never seen him treat women anything other than respectably”.

The article recounted the time Mr Trump hosted a pool party at his Mar-a-Lago resort in Palm Beach, Florida, in 1990, and brought Ms Brewer Lane, then 26 years old, into a room and opened drawers, and asked her to put on a swimsuit after she arrived at the party without one, not intending to swim.

The New York Times said Mr Trump, then 44 and in the middle of a divorce, then “decided to show her off to the crowd”. “He brought me out to the pool and said, ‘that is a stunning Trump girl, isn’t it?’” Ms Brewer Lane said, according to the New York Times article.

The former model told Fox News yesterday that Mr Trump “never made me feel like I was being demeaned in any way”. The businessman tweeted: “With the coming forward today of the woman central to the failing @nytimes hit piece on me, we have exposed the article as a fraud!”

New York Times reporters Michael Barbaro and Megan Twohey, who wrote the feature published on Sunday under the headline, “Crossing the Line: How Donald Trump behaved with women in private”, said that they stood by their story.

Mr Trump is dealing with a frenzy of speculation around who he might pick as his vice-presidential candidate and a potential third-party candidacy aimed at stopping him, something the Republican national committee has said would be a “suicide mission”.

Dr Carson later denied that these names were being considered and ruled himself out.