Expressions of joy and happiness break out across America after Pennsylvania went to Biden, handing him the presidency

As news broke that Joe Biden had defeated Donald Trump in the race for the White House, cities across the US saw wild celebrations from supporters of the Democratic nominee for president. Video: Reuters/NBC 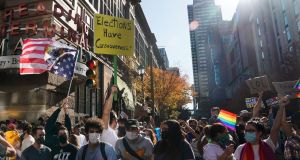 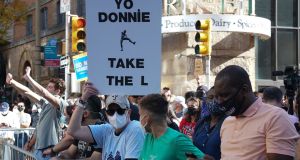 As news broke that Joe Biden had defeated Donald Trump in the race for the White House, cities across the US saw wild celebrations from supporters of the Democratic nominee for president.

In Philadelphia, the biggest city in Pennsylvania, the state where Mr Biden was born and which sealed his electoral college victory, celebrations erupted outside the convention center where votes were being counted.

Donna Widmann, a teacher who helped get her students and their families registered to vote, told the Guardian she had not been able to stop crying.

“I remember four years ago, watching, you know, on January 21st 2017, him getting inaugurated,” she said, referring to Mr Trump’s installation as the 45th president after his shock victory over Hillary Clinton. “And just crying, just watching [BARACK]Obama leave and just crying. I feel like so much, so much emotion has happened in the past four years, man, and it just feels really good - like I can’t stop crying.”

Ms Windmann, who was holding a sign saying Trump should “take the L”, said she was “psyched” for her students and her families to know they made a difference.

Alice Sukhina, who is from Ukraine, said she had volunteered for the Biden campaign. She had not been able to see her family in four years, she said, adding that she had sent them messages saying that the wait would soon be over.

“I am overwhelmed with happiness,” she said. “I’m just so ready to get some real progressive things done. I’m ready to push the platform of Democrats to the left.”

Marissa Babnew said she was “utterly excited for the first time in a very long time” and added: “I’ve had a lot of close experiences with this pandemic because of my work, and I’m finally feeling hopeful.”

In Manhattan, where Mr Trump made his fortune in real estate but where he remains a highly controversial and deeply divisive figure, crowds flocked to public spaces including Washington Square Park.

Uptown, in Washington Heights, two friends, both actors, celebrated in Bennett Park, the sight of a key battle in the American revolutionary war.

“Our long national nightmare is over,” said Paul DeBoy, happily quoting Gerald Ford’s famous message to the nation after the resignation of Richard Nixon in 1974.

Ward Duffy said the cheering out of apartment block windows, banging of pots and pans, and cars honking in the streets represented “a different celebration than this summer’s respectful salutes to frontline workers” during the coronavirus pandemic.

“This had a visceral explosion of relief and joy,” he said.

Cheering, honking and banging of pots and pans erupted in Harlem too.

Chase Rivera was pedaling a free Citi Bike at top speed past 152nd Street, dinging its bell and whooping loudly, wearing a Black Lives Matter T-shirt. He skidded to a halt when the Guardian flagged him down and, sweating in the late fall sunshine, said: “We were on our way to a dictatorship. This is the happiest I’ve seen people in 2020.”

The native New Yorker (25) said he was a laboratory scientist and looked forward to a president who once again respected science.

“Let’s hear it for science,” he said. “Biden and Harris have already spoken on the coronavirus, and we need to get to grips with it. Then I’m very excited for the Green New Deal, and that we will be part of the Paris climate accord again and take action on the climate crisis.”

Alan Mingo, a Broadway and film actor who has lived in the Sugar Hill part of Harlem for 17 years, had tears in his eyes as he roamed the streets, texting with friends.

“Seeing this euphoria, this jubilation, it’s incredible,” he said.

He said he had been shaken out of half-sleep by the eruption on the streets when the race was called, and had passed people exclaiming how their vote had mattered.

As a Black gay man, he said, he saw Mr Trump as having inflicted pain “on Black and brown people, not just with his rhetoric, but when he started separating children [from their parents at the US-Mexico border] that had echoes of so many bad things from our history”.

He added that he was very proud that Kamala Harris would become vice-president, the first woman of colour elected to the role.

On the west coast, cheers and the banging of pots and pans rang out through streets just blocks away from the hospital where the vice-president-elect was born.

It was about 8.30am PT when the Associated Press made the call that Biden had secured the final electoral votes to win the presidency. Oakland awoke to cheers and honking cars.

Ms Harris was born in Oakland in 1964 and grew up in neighboring Berkeley.- Guardian News and Media