History of complaints against officer in James Blake arrest 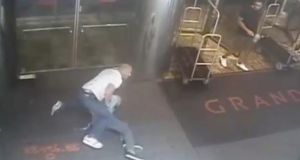 A frame grab from a surveillance video released by the New York Police Department shows an undercover New York City police officer arresting former professional tennis payer James Blake in New York. Blake, who was in front of a hotel waiting to attend the US Open, was misidentified by police as a suspect in a credit card fraud scheme. Photograph: EPA/NYPD 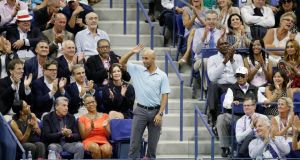 Former tennis star James Blake waves to the crowd as receives an ovation at the US Open. Photograph: Andrew Gombert/EPA

In 2012, a Queens man said officer James Frascatore pulled him over for a broken tail light, opened his car door and punched him three times in the mouth, unprovoked.

The following year, another Queens resident recalled, Frascatore beat him in his driveway during an arrest after he started to go into his home to retrieve an identification card.

Those accounts, both made by black men, came to light after a rough arrest by the same officer on Wednesday in which he wrapped an arm around the neck of retired tennis star James Blake and threw him to the sidewalk after mistaking him for a suspect in a credit card fraud investigation.

The New York Police Department released surveillance video of the arrest on Friday, offering a minute-long glimpse of the manhandling of a biracial celebrity by a white plainclothes officer that compelled police officials to swiftly strip the officer of his gun and badge.

Blake was leaning against a mirrored beam outside a hotel in midtown Manhattan, his hands clasped and motionless, as he waited to be taken to a corporate appearance at the US Open. Frascatore (38) rushed into the video’s frame, twisting Blake’s left arm, grabbing the back of his neck and pulling him facedown on to the sidewalk.

He finished by digging his knee into Blake’s back and handcuffing him, never easing up even though the Harvard-educated athlete barely flinched as he let himself be tackled.

“As I told the commissioner, I am determined to use my voice to turn this unfortunate incident into a catalyst for change in the relationship between the police and the public they serve,” Blake said in a statement Friday, calling for the city to make “a significant financial commitment”.

Mayor Bill de Blasio and police commissioner William J Bratton, in a joint response, noted the city’s $29 million (€25.6m) investment in retraining police officers and pledged “to vigorously implement these reforms that build trust and respect between police officers and the people they serve”.

Frascatore’s history of excessive force complaints, including at least three filed against him with the Civilian Complaint Review Board in 2013 and several lawsuits, revealed a pattern of residents claiming they were detained without explanation and manhandled despite complying.

It also led some lawyers and residents to criticize the police department for not punishing him before he was involved in another rough arrest.

“I don’t know what that dude’s problem is but I’m glad it finally came to somebody who someone would listen to,” said Warren Diggs, who sued Mr Frascatore, claiming that the officer had beaten him in his driveway in 2013.

Frascatore and two other police officers followed Diggs as he rode his bike home from a bodega at night, and then stopped him in his driveway and asked for identification, Diggs said on Friday.

When he began walking into his home to get it, an officer grabbed him from behind and immobilized his arms while Frascatore punched him in his right temple, Diggs said. He collapsed, injuring his shoulder on the pavement. Then, Diggs said, Frascatore threw himself down on his legs and continued to pummel him.

“Frascatore starts punching me again; I’m getting hit all on my side and my back,” said Diggs (39) a handyman. “I’m screaming for my wife to come outside then I just start screaming, ‘Help!’” Another officer sprayed Mace into his face. The officer who grabbed him, still holding him from behind, hooked a forearm around his neck and began to choke him, he said. “I’m saying: ‘I can’t breathe! I can’t breathe!’” Diggs recalled.

Diggs was charged with marijuana possession and resisting arrest, he said. His wife was charged with tampering with evidence when she took his bicycle inside the house. Their daughter, then 12, and son, then nine, wept hysterically, he said. The charges were eventually dismissed.

“The commissioner has taken it upon himself to apologize to James Blake, a wealthy star athlete, for the indignity he was made to endure,” Diggs’s lawyer, Amy Rameau, said. “I’ve never seen that happen.”

Efforts to reach Frascatore, who worked as police officer in Florida before joining the New York police force four years ago, were not successful. The Patrolmen’s Benevolent Association said his arrest of Blake “was made under fluid circumstances where the subject might have fled”.

Several people have complained that Frascatore pulled them over for broken tail lights they denied having, and then treated their questions as a pretext to hurt them.

Leroy Cline, a Queens resident, claimed that Frascatore punched him in the face after the officer ignored his questions and tried to pull him out of his car, according to a memorandum his lawyer sent to the Queens district attorney’s office. Cline was charged with assaulting a police officer. Frascatore later said Cline bit him.

The memo quotes from medical records, reviewed by an expert witness, showing the officer’s cut on his hand was consistent with him punching Cline in the mouth. In the course of arguing for the case against Cline to be dropped, the lawyer, Kenneth Finkelman, of the Legal Aid Society, said he uncovered complaints against Frascatore filed with the review board.

One of them, concerning the arrest of Diggs and his wife, was partially substantiated, but Finkelman said that the complaint was referred to internal affairs investigators and that there was no evidence the officer was punished. (The case against Cline was never brought to trial.)

“Rather than them actually vigorously keeping the public safe, they seem to be trying to shield the police officers,” Finkelman said.