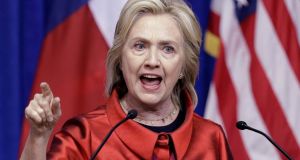 Hillary Clinton at Texas Southern University, Houston, where she delivered her most aggressive speech since she announced she was running for president. Photograph: Pat Sullivan/AP Photo

Republican senator Ted Cruz was firing up conservatives gathered to support his colleague Pat Roberts, who was struggling to hold on to his US Senate seat for Kansas in last November’s US midterm elections.

Introduced by Roberts at the October rally in a small hall in Topeka as the “prairie fire from Texas”, Cruz called on everyone there to vote for Roberts 10 times on election day.

“I am not encouraging voter fraud; we are not Democrats,” he said, to laughs. “Call nine of your friends who otherwise would have stayed home and been frustrated. Get nine more people to show up and vote.”

Allegations of voter fraud are regularly heard from Republicans and a series of voter identification laws have been introduced in conservative states since the early 2000s aimed at setting stricter ID requirements for voters when casting a ballot. Democrats say that these laws, pushed by Republican state governments, are designed to make it harder for African-Americans and other minorities to vote. They are fighting back with lawsuits in Ohio and Wisconsin.

Republican lawmakers maintain they are promoting electoral “integrity” and increasing turnout, but there has been little evidence of in-person voter fraud. A 2012 study by the News21 project at Arizona State University found, in an analysis of more than 2,000 cases of suspected election fraud between 2000 and 2012, that there were just 10 cases of in-person voter impersonation on election day. Allegations in these cases had already led to 37 state governments passing or considering tougher voter-ID laws.

In 2012 the Republican majority leader of Pennsylvania’s House of Representatives, Ryan Reilly, even admitted that a voter-ID law passed by the local legislature would help win the state for Mitt Romney.

The US has come a long on voting rights, but it still has some distance to travel. The Selma civil-rights march in Alabama, which President Barack Obama commemorated on his memorable 50th-anniversary visit in March, built support for the 1965 Voting Rights Act, which removed all barriers blocking African-Americans from voting.

A ruling by the US Supreme Court almost two years ago has gutted that landmark legislation. The nine-judge court found that an updated formula was required, under which the government gave pre-clearance on voting changes in all or part of 15 states, mostly in the South.

Congress had voted to extend the Voting Rights Act by 25 years in 2006, but the court ruled, over the objections of four liberal-leaning judges, in the Shelby County v Holder case that the formula was outdated.

For the first time in her campaign, she called out Republican rivals by name in a stinging attack on voter-ID laws that they had supported in their states.

She accused her rival presidential contenders, all former or current governors (Rick Perry of Texas, Scott Walker of Wisconsin, Jeb Bush of Florida and Chris Christie of New Jersey), of being “scared of letting citizens have their say” as she called for every American to be registered automatically to vote.

Clinton told them to “stop fearmongering about a phantom epidemic of voter fraud”, saying there should be extended access to polling stations by keeping them open for at least 20 days and creating opportunities to vote in the evening and at weekends.

It’s a subject that Clinton barely touched on in her 2008 campaign and an issue that will be hard to make stick given the challenging logistics of universal voter registration in a country with no national ID system.

Her attack, in a speech at the historically black Texas Southern University, had the added political advantage of taking a swing at Perry on the day he announced his own presidential campaign in his home state.

A voter-ID law enacted by Perry in 2011 was described by a federal judge in Texas as the most restrictive voter-ID law in the US, putting a disproportionate burden on minority voters. (The law was put back in operation after the US Supreme Court’s 2013 ruling.)

In her ruling, Texas district court judge Nelva Gonzalez Ramos referred to academic research on convictions for in-person voter impersonation in Texas between 2000 and 2010. The number? Two. The number of votes cast during that period? About twenty million.