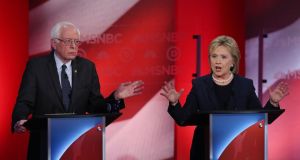 “It’s time to end the very artful smear that you have been carrying out.” Hillary Clinton and Bernie Sanders in New Hampshire. Photograph: Justin Sullivan/Getty Images

US presidential hopefuls campaigned hard in New Hampshire, the second state to vote on Tuesday, as Hillary Clinton looks to shake off an unconvincing win in Iowa and prove her frontrunner status.

Billionaire Donald Trump, who is leading Republican polls in the New England state and nationally, has been concentrating this week on speaking to voters at more intimate events, though he cancelled an event yesterday morning because of heavy snow.

Mrs Clinton put in an aggressive defensive display in Thursday’s final debate before the primary. She jabbed her insurgent rival Bernie Sanders, who has a 20-point lead in New Hampshire, over accusations that she is beholden to Wall Street for receiving millions in donations.

“It’s time to end the very artful smear that you and your campaign have been carrying out,” she said to boos from the crowd at the televised debate and angry groans from Mr Sanders.

The debate was the fiercest between the candidates as she came out swinging at her rival on her most vulnerable flank, challenging him to point to where she had changed her position because of a donation.

Asked whether she would be willing to release the transcripts of her speeches to Goldman Sachs, which paid her $675,000 (€609,000) for them, Mrs Clinton said: “I will certainly look into it.”

A Quinnipiac national poll showed the Democrats in a statistical tie with Mrs Clinton on 44 per cent and Mr Sanders on 42 per cent.

For some Republicans, the Granite State is a make-or-break moment as they compete to be the establishment’s alternative to Mr Trump or Texas senator Ted Cruz, who won in Iowa.

Marco Rubio, the Florida senator enjoying momentum from a surprisingly strong third-place finish in Iowa, rose to second with 18 per cent in the latest New Hampshire tracking poll by CNN/WMUR.

Mother of all battles

“He is not a bragger – we don’t allow that,” she said of her son. “He’s decent and honest. He is everything we need in a president.”

In another attempt to tap a bigger audience, Mr Sanders will appear alongside doppleganger, comedian Larry David, on Saturday Night Live, the sketch show that candidates lampoon themselves on.

Tomorrow Mrs Clinton will visit the majority-black city of Flint, Michigan to highlight the city’s water crisis, a visit that will play strongly in southern states where she has a strong advantage over Mr Sanders among African Americans.