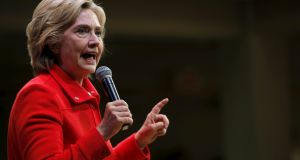 US Democratic presidential candidate Hillary Clinton has blasted the House select committee as a “partisan arm of the Republican national committee” ahead of her appearance before it. Photograph: Brian Snyder/Reuters

There have been nine investigations into the deadly attacks on the US outpost in Benghazi, Libya, on September 11th, 2012, and none has unearthed any real evidence that the Obama administration covered up what happened or is responsible for wrongdoing over the attacks.

The inquiries, one by the state department and eight by congressional committees or staff reports, found the state department did not provide the Benghazi mission with proper security, but did not find Hillary Rodham Clinton, secretary of state at the time, or President Barack Obama, personally responsible for what happened.

However, many feel there are still questions to be answered. A poll released two days before Clinton’s much-publicised and highly politicised appearance at the House select committee on Benghazi on Capitol Hill today found 44 per cent of respondents were not satisfied with her response to the attacks that killed four Americans, including ambassador to Libya Chris Stevens.

For Republicans, Benghazi has become a catchword for the Obama administration’s duplicity and incompetence, spawning a host of conspiracy theories (many of which have been discredited by past investigations) that are thrown around as fact on election hustings.

It is the biggest stick Republicans have swung at Clinton, the Democratic presidential frontrunner, and more than three years on, the attacks continue to reverberate. The Obama administration’s initial inaccurate description of what happened in Benghazi cost Susan Rice, the former US ambassador to the UN, her chance at succeeding Clinton as secretary of state in late 2012.

Last year, the House committee investigating the attack – an inquiry established by the Republican speaker of the House of Representatives John Boehner – found the first evidence that Clinton used a personal email account for government business as secretary of state as it requested correspondence between Clinton and her aides about the attack.

Her use of a private email server has led to an FBI investigation and allegations that she jeopardised national security.

The email controversy, since it emerged in March, has hung over her 2016 campaign like a dark cloud. Last week rival candidate, Senator Bernie Sanders of Vermont, said that people were “sick and tired” of hearing about her “damn emails”.

Unfortunately for Clinton, the emails are still fuelling fresh attacks and all eyes are on the committee, now in its 17th month of investigations, and how its chairman, Republican congressman Trey Gowdy of South Carolina, handles a witness at a critical time in her campaign.

It is not just an opportunity for Gowdy and his fellow Republicans to discredit Clinton’s record as secretary of state, but to tarnish the reputation of a 2016 presidential hopeful. The stakes are sky high.

The Clinton campaign team has had the upper hand coming into her appearance, capitalising on a gaffe by Republican House majority leader Kevin McCarthy. He bragged about something long-denied by Republicans: that the committee, funded with $4.5 million of public money, was set up to hobble Clinton’s political ambitions.

“Everybody thought Hillary Clinton was unbeatable, right? But we put together a Benghazi special committee, a select committee, what are her numbers today? Her numbers are dropping,” McCarthy told Fox News on September 29th. About a week later, he dropped out of the race to succeed Boehner as House speaker. “Well, that wasn’t helpful,” said McCarthy of his damaging remarks.

A second Republican congressman, Richard Hanna of New York, admitted days later on a local radio station “there was a big part of this investigation that was designed go after people and an individual, Hillary Clinton”.

McCarthy’s remarks put Clinton on the offensive. She has blasted the committee as a “partisan arm of the Republican national committee” and, ahead of her appearance before it, her campaign team has been pointing to the highlights of her four-year tenure as America’s top diplomat.

“Given the McCarthy gaffe and the political noise that the Democrats have been able to make with that to date, it is going to be a challenge for the committee to achieve a measurable political gain at the hearing,” said Manus Cooney, former top aide to Republican senator Orrin Hatch while chairman of the Senate judiciary committee.

One Republican aide said Clinton performed so strongly when she testified about Benghazi before the Senate foreign relations committee in 2013 that the House committee was unlikely to be any more successful at landing a hit on the formidable former first lady.

Gowdy has defended the committee ahead of Clinton’s appearance, coming out strongly against members of his own party.

“I have told my own Republican colleagues and friends, [to] shut up talking about things that you don’t know anything about,” he said on Sunday.

“You reach the point of burning Joan of Arc at the stake over and over again that it doesn’t win you many points in the public’s eyes and you run the risk of only hurting yourself,” he said.

“That being said, chairman Gowdy has tried to avoid appearing partisan . . . he has been very disciplined so he may have a very significant case to make.”

Privately, Republicans question the committee’s capacity to tackle Clinton, who is adept at turning situations like this appearance to her advantage, particularly when they haven’t scored well so far.

The fear among the party is that the Clinton appearance could turn into the repeat of the testimony of Cecile Richards, president of the Planned Parenthood clinics, who was able to bat away criticisms from Republicans during a House panel hearing last month.

Certainly, today’s hearing could turn into an opportunity for Clinton to list her achievements in foreign policy.

“I think this will backfire on the committee. They are trying to pin something on her that isn’t supported by the evidence,” said Tom Wright, a fellow at Washington think tank, the Brookings Institution.

“I really don’t think they have anything and the burden is on the committee to show that it is not a political witch- hunt.

“She is impressive when her back is to the wall and she is under pressure, and this will be no exception. I would be surprised if they land any blows.”