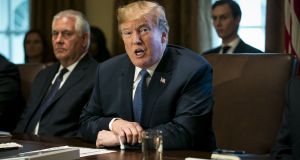 US president Donald Trump on Wednesday: “Diversity lottery sounds nice. It’s not nice, it’s not good, it hasn’t been good, we’ve been against it,” he said. Photograph: Al Drago/Bloomberg

Irish officials have given a cautious response to the proposal by US president Donald Trump to abolish the green card lottery scheme, as the Trump administration continues its clampdown on immigration into the United States.

Revelations that the Uzbek suspect in Tuesday’s attack in New York entered the United States on the visa programme prompted Mr Trump to call for the abolition of the visa lottery system on Wednesday. The green card lottery system is offered to 50,000 people from 160 countries every year.

The visas are distributed on a regional basis with countries that send fewer immigrants receiving more diversity visas.

However, the number of Irish who participate in the scheme is relatively low – approximately 160 people are awarded to Irish citizens each year, less than 1 per cent of the total allocated across the world. This in turn represents about 10 per cent of the 1,600 or so green cards which are awarded to Irish people each year, through different mechanisms, by the United States.

Irish officials in Washington and US special envoy John Deasy have been pressing for a more merit-based system for Irish immigrants into the United States. In particular, a move is under way to secure the E3 visa that is offered to Australians, for Irish citizens, with efforts afoot to potentially attach a provision to upcoming immigration legislation that could be published as early as March.

Making his first televised remarks about Tuesday’s atrocity in which eight people were killed and 11 wounded when Sayfullo Saipov (29), originally from Uzbekistan, allegedly ploughed a pickup truck down a crowded bike path in Manhattan, Mr Trump said he would immediately seek to end the diversity lottery programme – the official name for the green card lottery.

“Diversity lottery sounds nice. It’s not nice, it’s not good, it hasn’t been good, we’ve been against it,” he said. “We want a merit-based programme where people come into our country based on merit and we want to get rid of chain migration.”

Responding to the news that Mr Trump was asking Congress to end the visa programme minutes after it was announced, Taoiseach Leo Varadkar said: “When it comes to immigration policy, it is up to the American government and the American congress to decide what its immigration policy is. We would have a somewhat different perspective to the United States.”

Mr Varadkar, who began his first official visit to the United States on the west coast on Wednesday, also extended his condolences to the victims of Tuesday’s terror attack in New York.

“The Irish Government and people extend their condolences to the people of New York who once again have had to face a terror attack. As far as we know there are no Irish people caught up in it and we sent our condolences and a message of solidarity to mayor Bill de Blasio just to mark what has happened.”