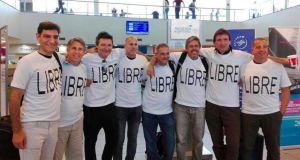 A group photograph taken last Saturday, October 28th, provided by the Trevisan family, shows Argentinian men before their trip to New York where they were caught up in the Manhattan terror attack. From left to right are Hernan Ferruchi, Alejandro Pagnucco and Ariel Erlij (all now deceased), Ivan Brajckovic, Juan Pablo Trevisan; Hernan Mendoza and Diego Angelini (both deceased) and Ariel Benvenuto. Photograph: courtesy of Trevisan family via AP

Above the grey walls of the San Martín Polytechnic in the Argentinian city of Rosario, the white and blue national flag flew at half-mast on Wednesday, as the country mourned five friends who were mown down in the New York truck attack during a trip to celebrate the 30th anniversary of their graduation from the school.

The five Argentinian victims were all well-known architects and businessmen in Rosario, an economic powerhouse. It is also noted as the hometown of Ernesto “Che” Guevara and Lionel Messi.

They were among eight friends who travelled from Argentina on Sunday for a trip to New York and Boston, near where one of their classmates lives.

A picture taken at Rosario airport shows them dressed in matching white T-shirts emblazoned with the word “Libre” (Spanish for “Free”), which had been designed especially for the trip. Only three of the group survived Tuesday’s attack.

The other five, Ariel Erlij, Hernán Ferrucchi, Alejandro Pagnucco, Hernán Mendoza and Diego Angelini, all died after being run down by the truck in Lower Manhattan.

The group had travelled to New York to meet with two other former schoolmates, one of whom, Martín Marro, survived the truck attack but remains in hospital.

The class of 1987 former schoolmates, all between 47 and 49 years old, were riding their rented bikes on West Street when they were mown down by the truck attacker.

“It was the first time they had all gone abroad together,” said Cecilia Piedrabuena, the wife of one of the survivors, Ariel Benvenuto. The 10 friends had planned to cycle around Central Park and then cross Brooklyn Bridge, she told LT8 radio.

But at 4.45pm, Piedrabuena received a call from her husband, who told her he was alive – but that something terrible had happened.

Her husband was cycling closer to the the central flowerbed. “All those who were on the right were rammed. He heard the acceleration [of the motor] and the vehicle ran over his five friends. He was 20cm away from being hit.

“They were 10 friends from high school who always got together. What happened is terrible,” she said.

Argentina’s president, Mauricio Macri, described the men as “model citizens in Rosario society”, adding: “We all must stand together in the fight against terrorism.”

In Rosario, the men were known as avid sports fans who had – through college, employment, marriage and fatherhood – maintained their close friendship over the decades since they left school in 1987.

One of the victims, Ariel Erlij (48), a wealthy steel mill owner and father of three young boys, had paid the air fares for some members of the group who could not afford the trip.

“He was a great, great father, a great friend, a very generous guy,” Gustavo Scaglione – a friend of Erlij – told local reporters. “Rosario has lost a great businessman. He was a machine of doing things. But most of all he was a great guy.”

Another of the victims, Hernán Ferruchi, was a successful architect who designed luxury high rises built along the Paraná river, which flows through Rosario.

Hernán Mendoza and Alejandro Pagnucco were also well-known architects in Rosario. They had not only been high schoolmates but also studied architecture together. Mendoza was a rugby aficionado and Pagnucco had three daughters.

“We’re a very tight group, that’s how our school formed us,” said Jorge Nid, another classmate who stayed behind in Rosario and who heard the news from one of the survivors in a Whatsapp message from New York. “I can’t understand it, I can’t get it through my head.”

Student reunions at the San Martín Polytechnic are a well-established tradition in the city of Rosario, sometimes drawing thousands of past pupils, friends andrelatives each year to celebrate.

Alicia Oliva, a director of the school, said one of the victims had a child studying there, and announced a week of mourning. “We would like to express our deepest sadness, and embrace all your loved ones in this difficult moment that nobody, ever, should have to bear,” the school said in a statement posted on Instagram.

The attack marked Argentina’s worst death toll from a terror attack since the 1994 bombing of a Jewish community centre in Buenos Aires, in which 85 people were killed.

Another graduate of the school, Laura Racca, said: “Because you come from Argentina, far away from wars and terrorism, you have a sensation that nothing is going to happen to you. It’s this craziness of globalisation of which we are not exempt: we are far away from everything but this can also happen.”– Guardian service