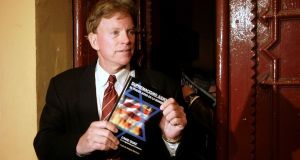 David Duke, former Grand Wizard of the Knights of the Ku Klux Klan: “I’m overjoyed to see Donald Trump and most Americans embrace most of the issues that I’ve championed for years.” Photograph: Gustau Nacarino/Reuters/File Photo

There was no better place that an Irish bar for some Republicans to mourn the death of their party as Donald Trump formally accepted the presidential nomination.

Former and current Republicans gathered for a traditional Irish wake in The Dubliner bar, a Capitol Hill institution in Washington popular with Democrats and Republicans alike.

Patrons were greeted at the bar by a wreath of white flowers surrounding a sign that read “R.I.P. GOP” [Grand Old Party]. Inside, on the bar, a photograph of Ronald Reagan sat in front of a small coffin next to portraits of Abraham Lincoln, Theodore Roosevelt and Dwight D Eisenhower.

“We said we should get together and have a drink and toast the death of the party, as we sit here and watch it dying on us,” Chris Scheve, one of the event organisers, told local Washington station, WTOP.

To the respectful applause from the crowd around the arena, Trump went off-script in response: “I have to say, as a Republican, it is so nice to hear you cheering for what I just said. Thank you.”

Google said that there was a 15,000 per cent rise in searches of the acronym on Thursday night. Well, at least the mention and the increased interest is some kind of progress.

76 – number of minutes Trump spoke for in his acceptance speech, the longest since Democrat George McGovern in 1972. His address was longer than Mitt Romney’s and Barack Obama’s speeches combined in 2012. Why are we surprised? He likes the sounds of his own voice (and everything else about himself).