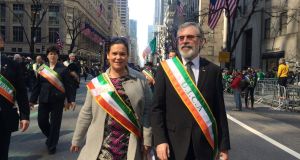 The controversy around Sinn Féin president Gerry Adams being denied entry to the White House’s St Patrick’s Day party on Tuesday was yesterday escalated up to President Barack Obama’s most senior aide and the US Secret Service director.

Mr Obama’s chief of staff, Denis McDonough, told US congressmen Richard Neal and Joe Crowley by telephone yesterday that he was going to ask US secretary of homeland security Jeh Johnson and a representative of the State Department to investigate what happened.

In a separate telephone call with the two Irish-American politicians yesterday, the director of the Secret Service, Joseph Clancy, “apologised profusely” for what had happened to the Sinn Féin leader.

Mr Adams had to wait for 90 minutes outside the annual party over what the Secret Service described as an “administrative input error”.

He decided to leave when it became clear the problem would not be resolved. The Secret Service later expressed regret over the incident.

Minister for Foreign Affairs Charlie Flanagan welcomed the explanation from the agency but criticised Mr Adams for drawing a parallel with civil rights leader Rosa Parks in reacting to the incident.

Mr Adams responded by saying that Sinn Féin would “not sit at the back of the bus for anyone”, drawing a parallel with Parks’s refusal in 1955 to relinquish her seat on a bus for one in a “coloured” section at the back.

During his St Patrick’s Day visit to New York, Mr Flanagan said he did not believe the comparison was “appropriate”.

Taoiseach Enda Kenny, on a visit to a summit of EU leaders in Brussels, described Parks as “an international icon, a woman of courage and bravery who made a real mark on history for its benefit”.

The conversations between the congressmen and the senior Obama aides occurred after they raised concerns about the incident in a letter from 10 members of the Friends of Ireland caucus of congressman.

Mr McDonough told Mr Neal that the incident may have arisen as a result of “a typo” in inputting Mr Adams’s personal details. Mr Neal said he and Mr Crowley explained “the political and the security implications” of the incident to Mr Clancy in their call.

The director took full responsibility for what happened and promised it would not happen again, the Massachusetts congressman said.

Mr Neal told The Irish Times about the incident’s significance given that the Clinton administration granting of a visa to Mr Adams in 1994 was “one of the critical moments” in the Northern Ireland peace process. “If you are standing outside of the White House and everybody is going past you, the situation is not likely to land well,” he said.

Mr Crowley said the Obama administration was aware of the “unintended consequences of this unfortunate event”.

“They understand the optics of this and want to avoid anything like this from happening again,” said the New York congressman. “It was not intended.”