Friel remembered on Broadway with laughter and tears

One of Ireland’s best known playwrights Brian Friel has died aged 86, Peter Crawley of The Irish Times and Fiach Mac Conghail of The Abbey Theatre speak about his career and legacy. 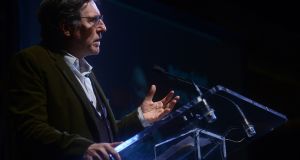 Gabriel Byrne reading from Philadelphia Here I come at a memorial to the late Brian Friel at the Samuel J. Friedman theatre in New York on Monday night. Photograph: James Higgins 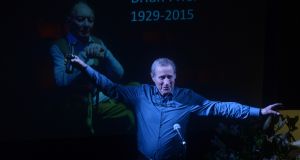 Humour was tinged with sadness at a celebration of the life, work and wit of Brian Friel as friends and collaborators remembered the greatest Irish playwright of his generation on a Broadway stage.

The Irish Repertory Theatre, which says it has staged more Friel plays than any other US company, played host to a memorial service on Monday to the writer who died in October at the age of 86.

Warm tributes were paid at the ceremony in the Samuel J Friedman Theatre, home to the Manhattan Theatre Club that staged the New York premiere of Friel’s play Translations in 1981.

The memorial came before Broadway honours the Irish playwright on Tuesday night by dimming its lights at 6.45pm New York time.

Broadway has gone dark for few people, said Ciaran O’Reilly of the Irish Repertory Theatre, putting the Donegal playwright in “the pantheon of the greatest writers of our age.”

Performers shared anecdotes about Mr Friel’s skill at turning stories of ordinary life in his fictional Ballybeg into extraordinary tales with universal meaning. They also spoke of his sense of fun, conviviality and acerbic putdowns of over-weening actors and disdain for directing.

Reminiscences of Friel were interspersed with music and readings from his best known plays by performers including Gabriel Byrne, Belfast actor Geraldine Hughes and English actor Jim Dale.

Before reading from Philadelphia Here I Come! Byrne told an audience that when he saw the play as a teenager it was “the first time I went to the theatre and remember being surrounded by people laughing.” The play had a profound effect on the Dubliner.

Seeing Friel’s characters, the insecure Gar Public and the outspoken Gar Private, the teenage Byrne felt “my life was being talked about and in a strange prophetic way.” He, like Gar, left Ireland when he joined the cast of Friel’s Translations at the National Theatre in London.

Recalling their work in the US, Dowling recalled Friel’s “well-developed fondness for low humour and vaudeville” and accompanying him to Broadway musical Sugar Babies with Mickey Rooney and dancer Ann Miller who famously had “the most expensive legs in Hollywood.”

“At one point, she artfully shed a lacy garter and threw it to the audience,” he said, recalling one of their funniest moments together. “It landed right in Brian Friel’s lap. ‘Oh, begod, that will do me,’ he says.’”

Dowling said that an actor once challenged Friel’s authority as a writer, telling him in a rehearsal that a particular line “doesn’t work.”

“It’s your job to make it work” was his laser-like reply.

Ireland had lost “a great patriot” in Friel, said the former artistic director of the Abbey Theatre.

“The world will remember Brian Friel as one of the great Irish playwrights of his time,” said Dowling.

Those who knew and loved him would remember “his remarkable sense of humour, his trenchant comments on theatre people and events, his endless capacity for gossip, chat, good fun cigars and brandy - and above all the cherished warmth and the generous friendship that enrich all our lives.”

Award-winning US theatre director and playwright Emily Mann said Friel implored her to quit directing in favour of writing, telling her: “Stop the directing, dear. Directing is useless. Only the play remains.”

Another director Doug Hughes recalled his puzzled father, Barnard, the well-known Irish-American actor, questioning Friel about why he cited Latin verse at a critical moment in Translations.

“I suppose that is really the actor’s problem, isn’t it?” Friel replied.

Norah Considine Moore, the Irish housekeeper to Hollywood luminary Katharine Hepburn whose Manhattan home Friel always stayed in when he visited New York, said she will never forget the first time the star met him.

“She was so nervous, and that was not her,” said Moore.

Irish consul general in New York Barbara Jones shared a tribute from Minister for Foreign Affairs Charlie Flanagan. Friel and John Hume, his schoolmate at St Columb’s in Derry, articulated “a new thinking, a new politics and a new culture about living together in the face of histories that can divide us,” said Flanagan.

The ceremony included new music from Riverdance composer Bill Whelan, who wrote the film soundtrack for Dancing at Lughnasa. The piece was set to an unpublished poem Seamus Heaney wrote to Friel about the theatre called A Lighting Plot.

Whelan told The Irish Times afterwards that music informed Friel’s writing and there were times when he “felt that it was the appropriate moment to cease language and let music work in the way it does.”

Gabriel Byrne said the dimming of Broadway’s lights was a recognition that the Donegal playwright “touched a universal chord.”