First successful penis transplant in the US completed 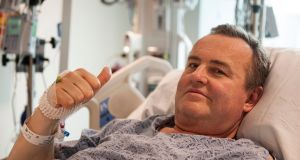 Thomas Manning gives a thumbs up from his hospital bed in Boston, Massachusetts, US. Photograph: Massachusetts General Hospital/Sam Riley/EPA

A 64-year-old man became the first in the US to undergo a successful penis transplant in a procedure at Massachusetts General Hospital earlier this month, his doctors said on Monday.

Thomas Manning, of Halifax, Massachusetts, had his penis amputated in 2012 when he was diagnosed with penile cancer.

He recently underwent a 15-hour surgery at Massachusetts General Hospital in Boston, during which a penis provided by a donor was attached.

Doctors said the procedure was particularly important due to the heavy psychological toll the loss of genitals takes on a patient.

“We are hopeful that these reconstructive techniques will allow us to alleviate the suffering and despair of those who have experienced devastating genitourinary injuries and are often so despondent they consider taking their own lives,” Dr Curtis Cetrulo, one of the two surgeons who performed the procedure, said in a statement.

In the same statement, Mr Manning thanked the doctors and said he hoped other patients needing similar surgeries would be more likely to receive organ donations as a result of his successful operation.

“Today I begin a new chapter filled with personal hope and hope for others who have suffered genital injuries,” Mr Manning said.

Doctors in South Africa became the first to perform the procedure successfully in 2014 after they attached a penis to a 21-year-old man whose organ had been amputated following a botched circumcision.