Ferguson police officer says ‘I did my job right’

Ferguson police officer Darren Wilson says he felt like a child trying to stop the wrestler Hulk Hogan when he got into a scuffle with 18-year-old Michael Brown. Video: ABC News/Reuters 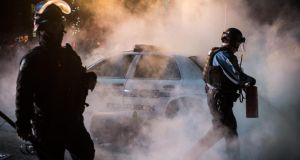 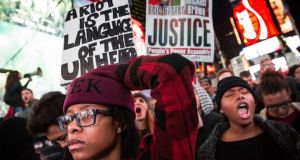 The police officer involved in the shooting of teenager Michael Brown in Ferguson, Missouri has said he has a clean conscience over the incident.

Darren Wilson, who could have faced charges ranging from involuntary manslaughter to first-degree murder over the shooting of the unarmed black teenager, was not indicted by a grand jury over the August incident, which prompted angry scenes in the town on Monday night.

He on Tuesday thanked supporters in a letter on a Facebook page for those who have rallied to his side, saying “your dedication is amazing.”

Office Wilson told ABC News in an interview aired in part on Tuesday that there was nothing he could have done differently in his confrontation with Mr Brown that would have prevented the teenager’s death.

“The reason I have a clean conscience is because I know I did my job right,” he told ABC News, adding he would have acted no differently had Mr Brown been white. His lawyer, Jim Towey, later told CNN that his client’s life as a police officer was over.

National Guard troops spread out across the St Louis area on Tuesday night to try prevent a repeat of the rioting and looting that followed the grand jury verdict.

Protests also erupted in major cities from Los Angeles to Washington on Tuesday. In New York, police used pepper spray to control the crowd after protesters tried to block the Lincoln Tunnel and marched to Times Square.

As darkness fell, the scene in Ferguson appeared significantly more controlled than on Monday night, dozens of protesters chanted “No justice, no peace!” near the police station before officers swiftly moved in to detain at least two people who defied orders to clear the road. More than 60 people were arrested in the town on Monday.

Camouflaged guardsmen armed with assault rifles quietly surrounded businesses damaged the previous night by protesters angry over the decision not to indict Officer Wilson in the August shooting of 18-year-old Michael Brown.

The protests were more intense than unrest that broke out in the immediate aftermath of the shooting itself, but still much smaller than those that followed the acquittal of police officers in the beating of black motorist Rodney King in Los Angeles two decades ago.

“Last night the rioters did some things to our community we all couldn’t have woke up this morning imagining,” Capt Ron Johnson of Missouri Highway Patrol told reporters.

Missouri Governor Jay Nixon said about 2,200 guard troops were deployed on to the Ferguson area on Tuesday night to protect homes and businesses.

“This community deserves to have peace,” Mr Nixon said. “We must do better and we will.”

US attorney general Eric Holder told reporters he was disappointed by the violent protesters he saw in Ferguson and has asked for a review to identify and isolate “criminal elements” from peaceful protesters.

Police were investigating as suspicious a body found in a car in Ferguson, and couldn’t rule out a link between the death and the rioting. Schools in Ferguson and its surrounding cities were closed on Tuesday, as were Ferguson city offices.

“This is going to happen again,” said Ferguson area resident James Hall (56), as he walked past a smoldering building. “If they had charged him with something, this would not have happened to Ferguson.”

Attorneys for Mr Brown’s family condemned as biased the St Louis County grand jury process that led to the decision not to bring charges, saying the prosecutor in the case had a conflict of interest and that Officer Wilson was not properly cross-examined.

Mr Holder said he had been briefed by Justice Department officials overseeing federal probes surrounding Mr Brown’s death, but did not say when investigators might complete their work.

President Barack Obama asked Americans on Tuesday to be “constructive” by engaging in debate about racial tensions and law enforcement, and said demonstrators who engage in criminal acts should be prosecuted.

Documents released by prosecutors said that Officer Wilson, who was placed on administrative leave after the shooting, told the grand jury Mr Brown had tried to grab his gun, and that the officer felt his life was in danger when he fired.