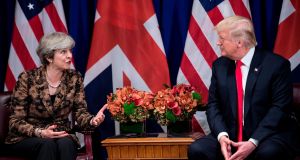 British prime minister Theresa May was lambasted by US president Donald Trump for criticising his sharing of anti-Muslim videos by the far-right group Britain First. Photograph: AFP/ Getty images

US president Donald Trump reignited the controversy over his move to share anti-Muslim videos on social media, as he lambasted British prime minister Theresa May on Twitter, stoking diplomatic tensions with Britain.

Following widespread condemnation of his sharing of three videos posted by the deputy leader of the far-right group Britain First on Wednesday, Mr Trump tweeted: “@Theresa_May, don’t focus on me, focus on the destructive Radical Islamic Terrorism that is taking place within the United Kingdom. We are doing just fine!”

His tweet followed a strongly-worded statement issued by Downing Street on Wednesday, which said that the US president was “wrong” to have shared the videos, and noting that Britain First is a group that “seeks to divide communities by their use of hateful narratives that peddle lies and stoke tensions”.

As the controversy threatened to undermine British-US relations, with several British politicians calling for Mr Trump’s visit to Britain to be cancelled, in Washington the controversy was eclipsed by speculation about the future of secretary of state Rex Tillerson.

Various US media outlets reported that the White House was making plans to replace Mr Tillerson with the head of the CIA, Mike Pompeo. Faced with questions from reporters about Mr Tillerson’s future, during a short press appearance in the Oval Office, Mr Trump replied: “Rex is here.”

.@Theresa_May, don’t focus on me, focus on the destructive Radical Islamic Terrorism that is taking place within the United Kingdom. We are doing just fine!

White House press secretary Sarah Huckabee Sanders also appeared to dismiss the reports. “As the president just said, ‘Rex is here’. There are no personnel announcements at this time. Secretary Tillerson continues to lead the State Department and the entire cabinet is focused on completing this incredibly successful first year of President Trump’s administration.”

Speculation about deteriorating relations between the president and his secretary of state have been rife since Mr Tillerson was reported to have described Mr Trump as a “moron” during a meeting earlier this year.

Mr Pompeo (53) was appointed by Mr Trump as head of the CIA in January. A retired army officer, he represented Kansas in the House of Representatives until his nomination by the president. As one of Mr Trump’s chief advisers on intelligence issues, he is understood to have a hawkish stance on North Korea and has also opposed the Iran deal.

According to the New York Times and the Washington Post, Mr Pompeo may in turn be replaced as CIA chief by Arkansas senator Tom Cotton, who has emerged as a key Trump ally in the senate over recent months.

Mr Tillerson was not the only senior political figure to find himself the subject of speculation on Thursday. House minority leader Nancy Pelosi called on John Conyers, the longest-serving member of Congress, to step down, following revelations that he had reached a settlement with a staffer over sexual harassment claims. There were unconfirmed reports that Mr Conyers, who represents Michigan in the House of Representatives, had been admitted to hospital on Thursday.

Mr Conyers, a founding member of the congressional black caucus, is the latest high-profile US politician and media personality to have been accused of inappropriate sexual advances in the wake of the Harvey Weinstein scandal.

Meanwhile, a key vote on the Republican plan to reform the tax code was due to take place in the Senate late on Thursday or Friday morning, as senators began debating amendments to the bill. In a boost for the republican leadership, Senator John McCain indicated he would support the proposal, which includes plans to cut the corporate tax rate to 20 per cent, reduce the number of tax brackets for individuals and introduce a tax incentive to encourage companies to repatriate income harboured offshore.

The US president namechecked Ireland in a speech in Missouri on Wednesday night, as he pledged to bring back US investment to American shores.

1 All students will not return to school even if social distancing rules are relaxed – McHugh
2 Emily Maitlis thanks BBC viewers for support after Cummings row
3 Church closes its doors after flouting public health rules
4 Miriam Lord: Taoiseach is trapped in a Zoom session from hell
5 The human cost of Covid-19: Ireland's care homes with the most deaths revealed
Real news has value SUBSCRIBE