‘For too long, our tax code has incentivised companies to leave our country’ 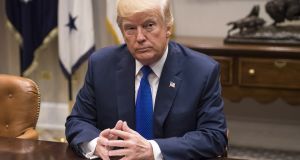 US President Donald Trump: “For too long our tax code has incentivised companies to leave our country in search of lower tax rates. It happens – many, many companies. They’re going to Ireland. They’re going all over.”

US President Donald Trump has again name-checked Ireland as he vowed to bring back “trillions of dollars” in wealth back to the United States.

In a speech to supporters in St Charles Missouri on Wednesday Mr Trump said he would not “name names” as he spoke at length about how other countries had attracted US investment at the expense of America.

But he went on to single out Ireland, as he pledged to attract US multinational investment back home. Having described how Apple and other companies had kept billions of dollars offshore, he said that American companies had for too long been incentivised to leave for other countries like Ireland.

Mexico was the only other country mentioned by Mr Trump in his 50-minute speech, though he also referred to Asian countries with a more competitive tax regime.

Pledging the introduction of a territorial model of taxation, he said he estimated that between four and ficve trillion dollars was parked offshore: “and it’s going to be invested into our country, instead of sitting and helping others.”

Mr Trump was speaking ahead of an expected vote in the Senate on Thursday on the Republican tax reform plan. With Republicans controlling 52 seats in the 100-seat chamber, the party can only afford to lose two votes in passing thebill, with vice president Mike Pence holding a casting vote.

But despite signs that several Republican dissenters had come on board to back the proposal in recent days, fresh concerns about the bill’s effect on the deficit emerged on the eve of the vote.

If passed, negotiations will commence between the Senate and the House of Representatives, which passed its own version of the plan on November 16th, with the Bill expected to be signed by the President before year-end.