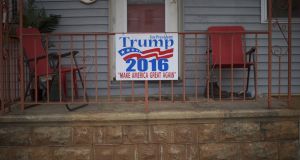 In the evening rush-hour, a steady stream of customers arrive at the upmarket Wegmans supermarket in King of Prussia to pick up dinner at the gourmet food counters inside.

“His chances were better before he started blowing himself up,” says one middle-aged male customer when asked what Republican Donald Trump’s chances are in this Philadelphia suburb in the election.

“This is a Republican area so he has got a better chance out here than in the city. Yeah, I am voting for him. I wouldn’t vote for a Democrat.”

An older woman who declines to say any more about her dislike of her party’s presidential nominee this year says: “I would like to move to Canada and I am a Republican.”

King of Prussia is in Montgomery County, one of the four “collar counties” surrounding Philadelphia that will decide whether Trump or Democratic rival Hillary Clinton wins Pennsylvania and the state’s 20 electoral votes on November 8th.

A Republican has not won here since George HW Bush in 1988. The state did not even figure in the top 10 advertising spends in the 2012 election.

The Rust Belt states are key targets for Trump and his message. His support among older, patriotic, less-educated, white lower- and middle-class voters gives him a strong base in rural Pennsylvania. But he is relying largely on this narrow coalition given the opposition he faces in swing states such as Florida, where he has alienated Hispanics. If Trump cannot carry Pennsylvania, he will likely have no path to the White House.

While his support in the rural parts of the state may be guaranteed, depopulation from the economic decline in those parts means that the New York tycoon may need to perform better than Mitt Romney did among suburban Republicans around Philadelphia and other cities in the state: Pittsburgh in the southwest of the state and the cities of Scranton, Wilkes-Barre and Hazleton in northeastern Pennsylvania.

That may prove difficult given how Trump’s divisive rhetoric, torrent of insults and abuse have turned off many centrist Republicans in these parts.

“He is so crazy and he has said such crazy things,” says Rae Smith (39), a cognitive therapist from Delaware County, another collar county of Philly, as she heads into Wegmans.

A traditional Republican voter, she will not be voting for the party’s nominee this year.

“I would vote for the majority of Republicans definitely over Clinton but there is no way that I will vote for Trump,” she said.

Kent Riddell (55), who works at a nearby biopharmaceutical company, comes from a Democratic family and considers himself a “Reagan Democrat”. He switched party allegiance with the 40th president back in the 1980s and has voted for Republicans ever since. Not this year, though; he is going to vote for Clinton, not Trump.

“He is too emotional for the seat of president,” he said. “You have got to have some tact. I just have never seen tact with Trump in anything he has ever done.”

“The road to the White House goes straight through Pennsylvania,” he said in a speech that attacked Clinton-Obama policies for creating “a weaker America on the world stage and a stifled American economy at home”.

The Trump-Pence promise to “end the war on coal once and for all” drew a particularly loud cheer in a heavily coal-mining state.

This was the first of two Pence rallies in Pennsylvania on Tuesday, taking in Montgomery and another collar county of Philly, Bucks County, that covers the northeastern suburbs of the city. Obama won both these counties along with nine others in the 67-county state, including Philadelphia County where the US president secured 557,024 votes, a huge 85 per cent of the voters in the country’s fifth most populous city.

Thomas Baldino, a professor of political science at Wilkes University in Wilkes-Barre, says Clinton needs at least 500,000 votes in Philadelphia and to perform as well as Obama did in the rest of the state in 2012 to win, regardless of how well Trump performs in rural areas and among defecting, disaffected Democrats.

“Trump will pick up a good number of these Democrats who are older, whiter and less educated, but he has also alienated middle-class and upper-class Republicans in the suburbs. Either those people won’t vote for Trump or they will vote for Clinton and that counter-balances those voters who will vote for Trump,” Baldino says.

Polls show Trump in trouble in the state. A RealClearPolitics average of polls in Pennsylvania give Clinton a nine-point lead over her rival.

Pennsylvania Republicans also believe there will be a lower turnout for Clinton this year than Obama enjoyed four years ago as she, like Trump, has poor favourability ratings. Clinton received 341,000 fewer votes in this year’s Democratic primary compared with her performance against Obama eight years, a 27 per cent decline.

Matthew Wolfe, a prominent Republican in Philadelphia who attended the Pence rally in the Tech Tube factory, says Trump can win by narrowing the margin across the state’s counties to improve on Romney’s five percentage point loss to Obama four years ago.

“What small-time politicians like me do is we move the margins,” he says, acknowledging that Trump would lose some suburban Republicans but gain more Reagan Democrats.

“There are a lot of registered Democrats that Trump is going to get. Even with those suburban Republicans, they are going to have a rude awakening when it comes time to make a decision. They might not be thrilled with Trump but the other choice is Hillary Clinton.”

Also at the rally is Grace Flanagan, a business teacher from Philadelphia whose grandparents came from Ireland. She believes Trump’s chances in the state are “grim”.

“It is doable but it is not going to be easy,” she said. “If he does not get Pennsylvania, he is going to be in big trouble.”