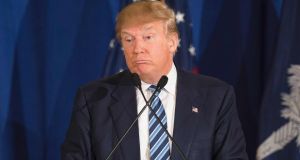 Donald Trump: brushed off pontiff’s remark that the billionaire was “not a Christian” if he wanted to build walls to keep migrants out. Photograph: Jim Watson/AFP

Donald Trump strides into the Legends Ballroom at the Kiawah Island golf resort to roars and a standing ovation. He’s like a champion golfer walking off the final green after winning.

With the gale of a strong lead in the polls in South Carolina (voting on Saturday) and nationally at his back, Trump can do or say no wrong. He came out swinging hard again on his bombastic US presidential campaign. The target this time: Pope Francis.

The pontiff’s remark that the brash billionaire was “not a Christian” if he wanted to build walls to keep migrants out riled the businessman.

“For a religious leader to question a person’s faith is disgraceful,” Trump told a crowd of about 600, mostly supporters, during the rally at the South Carolina resort, reading from his freshly released statement.  He took delight in telling the crowd this was breaking news – “you are the first to hear this”. It was his response to remarks made by the pope as he returned from a trip to Mexico.

“Everything’s nice and then I get hit, ‘the Pope just made a statement.’ ‘Oh good, did he say good things?’” said Trump, playing out the exchange with his staff. “No, I don’t think you’ll like it.”

But the reality TV star does like it, feeding on the oxygen of this kind of publicity.

It also fuels the wave of support that has lifted him above a large field of Republican candidates and builds up his no-holds-barred persona of a man who will not be silenced on any issue.

“He says what everyone else is thinking but is afraid to say,” said Joanna Horres, handing out Trump stickers to the crowd with her 11-year-old daughter, Sarah.

This is the fifth time that Joanna’s husband Randall has seen the candidate speak in South Carolina.

“I have seen most politicians speak here. I have seen Obama speak, but I have never seen the energy that’s typically behind a Trump rally,” he said.

“Most Trump supporters would walk through broken glass in bare feet to see him,” said his friend, John Steinberger, wearing one of Trump’s “Make America Great Again’ T-shirts and caps.

Ireland receives honourable mention by Trump in his speech for being the destination of choice for US drug company Pfizer and other multinationals who are relocating to avoid high American taxes.

But it is his retort to the pope that dominates the latest blustering speech from the property mogul.

“Now it is probably going to be all over the world. Who the hell cares, okay?” said Trump, to cheers of encouragement.

“I only tell the truth,” he tells the crowd. “Somebody said, ‘did you poll it? One of the politicians. Did you poll?’ I don’t poll what I say. I say what’s right,” he said, to yet more whoops.

To Trump and his supporters, the truth is what will make America great again, and the pope is interfering where he shouldn’t.

“That is a ridiculous statement for the pope to make,” said Steinberger, making his way out of the rally.

“The pope wants us to give everybody things. The Mexican government doesn’t take care of their own people. All countries have sovereignty and a right to defend their borders.”