President hopes to pack 19,000-seat centre but does not want to create ‘super spreader’ event 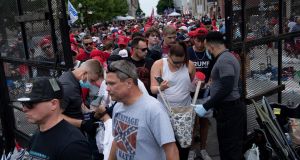 People enter a security checkpoint to attend a rally with US President Donald Trump on Saturday evening at the BOK Center on in Tulsa, Oklahoma. Photograph: Brendan Smialowski/AFP/Getty

President Donald Trump is determined to try to have a political comeback rally overnight despite the devastating health and economic crises that have unfolded on his watch, as well as the nationwide protests against racism that have left him on the defensive.

Mr Trump is scheduled to participate in two events in Tulsa late on Saturday: at 7pm Eastern time (midnight Irish time), he plans to deliver brief remarks at what the White House called a “Great American Comeback Celebration” event, and then he is set to attend a rally inside an arena at 8pm.

It is to be Mr Trump’s first rally since March 2nd. Vice-president Mike Pence, senator James Lankford of Oklahoma and almost a dozen House members, among others, were expected to join him. But the president is walking on the edge in several ways. He hopes to pack the 19,000-seat BOK Center and show that America is reopening, but he does not want to bear responsibility for creating a “super spreader” event that sickens his most die-hard supporters. The campaign is requiring waivers from attendees so it cannot be blamed if people catch the coronavirus.

The health guidance for rally-goers reflects those contradictory ambitions. Brad Parscale, Trump’s campaign manager, said he would distribute masks outside the arena and wear one himself, but would not require people to wear them inside. Kayleigh McEnany, the White House press secretary, said on Friday she did not plan to cover her face.

The Trump campaign does not plan to enforce any mask wearing or social distancing policies inside the arena. That means it will be up to people heading inside a crowded arena to care for themselves. Then there is the timing: Mr Trump will arrive in Tulsa a day after Juneteenth, and at a time when many Americans are grappling with the country’s racist history. His campaign is trying to spin the visit as an effort to shed light on African-American history, rather than to be insensitive to it.

Mr Trump thrust this rally into the nationwide conversation about racism when he originally scheduled it for Friday, the Juneteenth holiday that commemorates the end of slavery. So: What does the president say about race on the day after Juneteenth, in a city that had one of the worst episodes of racial violence in the nation’s history?

Many Oklahoma officials now acknowledge that racist past in Tulsa, where a white mob massacred black people in 1921 and destroyed a prosperous black neighbourhood. That openness has helped support racial reconciliation. But Mr Trump and his allies rarely show that kind of openness. On Friday, Mr Pence refused to use the words “black lives matter” in an interview with a Pennsylvania news station, saying instead that “all lives matter” – a phrase that dilutes the specific violence suffered by black Americans for centuries.

On Friday, there were signs of tension. As black Tulsans gathered to celebrate Juneteenth, one man at an encampment of Trump supporters about a mile away wore a shirt with a racist message claiming that some black people had been slave owners, too. Several also applauded Mr Trump’s veiled threat to those protesting over his rally.

Meanwhile, in a building overlooking the road where rally-goers had set up, signs hanging in the windows spelled out an obscenity directed at Mr Trump, as well as messages like, “Covid is real. And so is systemic racism.”

On Friday evening, several people in an entertainment district in Tulsa had been boarding up stores ahead of possible unrest. – New York Times