Democrat sees chance for new offensive in Arizona, Georgia and other red territories 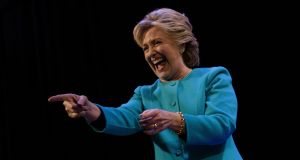 Hillary Clinton: The Democratic presidential nominee is looking at the potential to expand her electoral map. Photograph: Brendan Smialowsk/AFP/Getty Images

The implosion of Donald Trump’s presidential bid, from his boasts about sexually assaulting women to the allegations that he sexually assaulted women, has sent this race for the White House down the rabbit hole into unknown territory.

While Trump cries conspiracy to deflect self-inspection following a disastrous two-week run as he fires off claims of a rigged election and a biased media, Hillary Clinton is looking with glee at the potential to expand her electoral map.

All signs are pointing to a decisive Clinton victory on November 8th. A national NBC News/Wall Street Journal poll on Sunday, conducted after the second presidential debate, gave Clinton an 11-point lead over Trump among likely voters, 48 per cent to 37 per cent, in a four-way race. Another survey, the ABC News/Washington Post poll, gave Clinton a 47 per cent to 43 per cent lead.

Averaged out, Real Clear Politics puts the Democrat’s advantage at more than six points, which, translated into popular votes in the 40 to 45 per cent range for Trump, would amount to a landslide in electoral college terms, well above the 270 electoral votes required for victory. Trump appears, based on the most recent polls, to be heading for a defeat similar to John McCain’s 2008 loss to Barack Obama, assuming that enthusiasm for Clinton and Trump’s polarising effect gets voters out to the polls.

Her campaign manager Robby Mook pointed to positive signals for her campaign in a conference call with reporters on Monday; he said that he expected this election to be “have the biggest turnout in electoral history”.

On the state-by-state electoral map, Trump’s campaign, handicapped by the Democratic advantage in the electoral college voting system based on the big populations on the coasts and in the main cities, is concentrating on four states: Ohio and Florida (which Obama won twice), North Carolina (which Obama won in 2008 and lost in 2012) and Pennsylvania (which has voted Democratic since 1988). An average of polls shows Clinton ahead in all the main battleground states except Iowa, which went blue in the last two elections.

Trump’s divisive rhetoric has led her campaign to move beyond her firewall states of Pennsylvania and New Hampshire and target traditional Republican states such as Arizona and Georgia. Her aim is to make the Republican nominee’s path to the finish line of 270 electoral votes even more difficult than it already is.

The Democratic camp even see a chance to disrupt his chances in conservative Utah, where there is a competitive three-way race involving conservative Evan McMullin who is polling as high as the two main candidates.

Outlining Clinton’s new offensives into Republican territory, Mook said the campaign would invest an additional $2 million in TV and digital ads and direct mailing in Arizona. First lady Michelle Obama, one of Clinton’s most effective campaigners, will campaign for her in Phoenix on Thursday following visits by Bernie Sanders, Clinton’s Democratic challenger, on Tuesday, and Chelsea Clinton on Wednesday.

“We do see opportunity in Arizona,” said Mook. “We think that is an uphill climb, but our mission as a presidential campaign is to make sure that Secretary Clinton wins 270 electoral votes.”

Arizona has only voted for a Democratic presidential candidate once since 1948 – Bill Clinton in 1996. The Clinton camp sees an opening for split-ticket voting in her favour following Trump’s criticism of veteran Arizona senator McCain, the Vietnam War veteran whom he mocked last year for being captured.

The Clinton camp is pumping money into Indiana and Missouri in the hope of tipping down-ballot senate and gubernatorial races to help Democratic chances in the states and in winning back control of congress.

Her Brooklyn headquarters is also investing a six-figure sum in co-ordinated campaigns with Democrats running in Georgia whose growing African-American and Asian-American populations are shifting demographics in the party’s favour, particularly in Gwinnett County in the Atlanta metropolitan area. The last Democrat to win Georgia was Bill Clinton in 1992 and before him, home-boy Jimmy Carter, in 1980.

“Potentially,” said Charles Bullock, University of Georgia politics professor, when asked if the southern state was in play for Clinton. “There have been some polls showing Hillary ahead. If Democrats are looking for new worlds to conquer, Georgia would be top of that list next to North Carolina.”