Clinton has no regrets over Goldman Sachs speaking fees

‘That’s what they offered,’ says presidential hopeful on $675,000 fees from Wall St bank 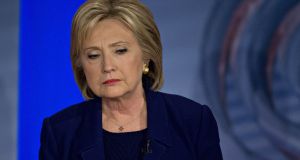 Hillary Clinton, former Secretary of State and 2016 Democratic presidential candidate, listens to a question during a Democratic debate on Wednesday. Photograph: Andrew Harrer/Bloomberg

Two days after her narrow win over US senator Bernie Sanders in the presidential race’s first vote in Iowa, Mrs Clinton was on the back foot when questioned about past earnings during a televised questions-and-answers session with people in New Hampshire which votes next.

Asked whether the speaking engagements were a mistake, the former secretary of state said that she makes speeches to lots of groups.

“But did you have to paid $675,000?” asked CNN news channel moderator Anderson Cooper in what was the moment of the night.

“Well I don’t know - that’s what they offered,” she said, drawing laughs from the crowd, and adding that “every secretary of state that I know” has accepted money for delivering speeches.

“Anybody who knows me, who thinks that they can influence me, name anything that they have influenced me, just name one thing,” said the former first lady, addressing one of her most vulnerable areas.

Mrs Clinton sought to distinguish between when she received the Wall Street money and her present campaign.

“They’re not giving me very much money now. I can tell you that much - fine with me,” she said.

Pressed again at the town hall-style meeting in Derry, New Hampshire, Mrs Clinton said that the paid speeches were not something she regretted.

“I don’t feel that I paid any price for it and I am very clear about what I will do and they are on notice,” she said.

Six days before New Hampshire’s primary election, the former US senator is trailing Mr Sanders, from neighbouring Vermont, by a substantial double-digit margin in the New England state.

Following her razor-thin victory in Iowa on Monday, Mrs Clinton is locked in a battle with Mr Sanders over her progressive credentials with the democratic socialist questioning her record, including her vote on the war in Iraq, and claiming that she is beholden to Wall Street.

In his separate televised questions-and-answers session, Mr Sanders raised doubts about whether she was a true progressive.

“I do not know any progressive who has a Super PAC and takes $15 million from Wall Street,” he said, referring to the large political groups that independently of the candidate can raise tens of millions to push their candidacy. “That’s just not progressive.”

The two candidates have been sparring over the rightful claim to the party’s most progressive candidate as they appeal to Democrats and independents in the “first-in-the-nation” primary after Iowa’s caucuses.

“Some of my best friends are moderates. I want moderates,” said Mr Sanders. “But you can’t be a moderate and a progressive.”

Mrs Clinton later rejected this, saying that he was too narrowly defining what a progressive was and that his definition would exclude Barack Obama and other liberal leaders in the Democratic Party.

“I am a progressive who likes to get things done. I was somewhat amused today that Senator Sanders has set himself up to be the gatekeeper of who is progressive,” she said.

Mrs Clinton, once the presumptive Democratic nominee, has faced a tougher fight from Mr Sanders who has beaten expectations with a populist progressive manifesto that has fired up grassroots liberals and sparked a debate over what’s aspirational and what’s achievable.