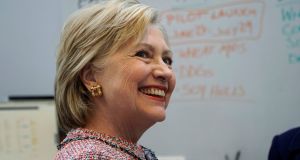 US Democratic presidential candidate Hillary Clinton has an 81 per cent chance of winning the election to Donald Trump’s 19 per cent, polling analyst Nate Silver said on Wednesday. Photograph: Rick Wilking/Reuters

Hillary Clinton has an 81 per cent chance of winning the election to Donald Trump’s 19 per cent, polling analyst Nate Silver said on Wednesday in his first model of the 2016 presidential election.

Mr Silver’s calculations are based on a model that processes polling data exclusively.

A second model produced by Mr Silver’s FiveThirtyEight web site, taking in economics statistics and historical data, portrayed a slightly tighter race, at 74 per cent - 26 per cent for Mrs Clinton.

Mr Silver gained international fame for his perfect, 50-for-50 performance at predicting state outcomes in advance of the 2012 presidential election.

Mr Silver’s performance was almost as good in 2008, when he correctly predicted outcomes in 49 of 50 states, and predicted the popular vote margin to within a percentage point.

Since becoming a smash success in 2012, however, Silver and his FiveThirtyEight colleagues have suffered some high-profile misses that could lead some observers to discount their predictions this year. Their most high-profile miss of all: Donald Trump.

Last August, Mr Silver rated MR Trump’s chances of winning the Republican nomination at two per cent, and he remained bearish on Mr Trump’s candidacy throughout the fall.

The mistake, he has since admitted, sprang from a blindness to the very data he has made a career reading so well.

The polls showing Mr Trump’s strength were right; the nagging contextual information that Mr Silver admitted he allowed get in the way – historical data, “gut” feelings about the candidate – was, in Mr Trump’s unique case, highly misleading.

FiveThirtyEight has made other mistakes. In March a FiveThirtyEight model gave Clinton a 99 per cent chance of winning the Michigan primary; Bernie Sanders won by a half-point. In the 2014 midterms, the site failed to anticipate a Republican wave that generated multiple upsets for its models.

“The polls did have a strong bias this year,” Mr Silver wrote afterward.

Apologists for Mr Silver might point out that despite his mistaken calls, he has usually been right, and quite precisely right, especially when it comes to presidential elections, which is the topic of inquiry at hand.

Mr Silver’s model is not out of line with recent national polling, which has given Mrs Clinton a lead of six or seven points, on average.

The polls are not, however, uniform. A survey released on Wednesday by the reputable pollsters at Quinnipiac University depicted Mrs Clinton with only a two-point lead, 42-40.

Mr Silver’s modeling of a strong chance of victory for Mrs Clinton in 2016 is based on analysis of the 50 separate state races plus Washington DC.

Mrs Clinton’s strength is visible in the 12 tightest state races as identified by the model. These toss-up races happen to a much higher degree in territory that Mr Trump needs to win.

In fact, Mrs Clinton does not need any of them: she could lose the first 12 toss-ups, as ranked by Silver, and still win the presidency, if only she won Florida, which Silver’s model judges to be, at this juncture, the 13th-closest state race.

The model weighs in on other important questions about the 2016 race. This includes how Pennsylvania will vote, which has been safe Democratic territory but has trended Republican in recent election cycles. Mr Silver’s model gives Mrs Clinton an 85.9 per cent chance of winning the state, and its 20 electoral votes.

The model also has Arizona, which should be a Republican shoe-in, basically tied, with a slight edge for Clinton. The model has North Carolina, Iowa, Colorado, Ohio, New Hampshire and Florida all leaning toward Clinton. The model really stinks for Mr Trump.

Entertainingly, the FiveThirtyEight forecast includes a section that awards probabilities for “crazy and not-so-crazy scenarios”.

For example, the model thinks that Trump has a 90.6 per cent chance of winning at least one state Obama won in 2012; so keep your eye on Colorado, Iowa and New Hampshire.

The model puts the probability of a “Clinton landslide” at 29.2 per cent.

Obama’s 2008 campaign manager, David Plouffe, predicted on Wednesday that Clinton would win the presidency with more than 350 electoral votes.

The question for Mr Silver is whether he can go 3-0.