Clinton and Bush turn to TV to show softer sides

Presidential candidates show television does not come easily to them 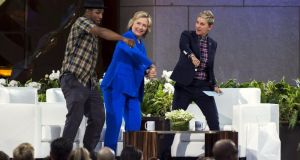 It was hard to say which was more awkward: Hillary Clinton dancing on Ellen DeGeneres’s talk show or Jeb Bush explaining to Stephen Colbert on his first Late Show that the exclamation mark in his “Jeb!” campaign posters “connotes excitement”. Clinton being guided through some dance moves edges it.

This week the two presidential candidates attempted to show a more human side away from the scripted talking points and carefully choreographed events by appearing on popular chat shows.

Both were presumed to be the nominees for their parties. Both are slipping up against two freewheeling rivals who have benefited from not holding back: Bernie Sanders on the Democratic side and Donald Trump on the Republican side.

“Hillary Clinton to show more humour and heart, aides say,” said the New York Times over a story about how she planned to be more spontaneous and less stiff and cautious.

Maybe one of those spontaneous moments was on her planned appearance on Ellen at New York’s Rockefeller Centre, home to an ice rink in winter. Comedian Amy Schumer, in a running gag, skated past Clinton, asking if she wanted to go skating. “I’d love to,” Clinton chimed in. “Do you have an extra pair?”

The chance to speak to a daytime audience of millions of viewers, mostly women, was invaluable, particularly when her favourability rating among women has been declining sharply.

Clinton’s lawyerly, equivocal responses to questions about her use of a private email address as secretary of state and confusion around whether information in those emails contained classified information have created the image of a guarded candidate who is not being upfront.

Women in politics traditionally have an advantage over men, seen by voters as more empathetic and trustworthy, while they must prove their credentials on leadership and competence, says Jennifer Lawless, professor of government at American University in Washington.

“In Hillary Clinton’s case there is no question that people think she is competent and a strong leader. The questions are actually about empathy and trustworthiness and the email controversy only reinforces voters’ concern,” she said.

In contrast, Vermont senator and self-described socialist Sanders has campaigned with abandon, selling his populist manifesto clearly not created by poll-testing policies. The 74-year-old has been drawing large crowds appealing to voters as a kind of rebel candidate. He has been railing against the establishment with attacks on big business and big-donor interests in politics and a campaign of income, gender and racial equality – policies he has been pushing throughout his long political career.

In New Hampshire, the second state to choose candidates, Sanders (from a neighbouring state) has led Clinton in three recent polls.

“We are so used to politicians being so well coiffed and tailored in every pose and every utterance being scripted that someone who seems more off the rack strikes us as refreshing,” said David Greenberg, associate professor of history and journalism at Rutgers University.

Where Clinton, still a front-runner in the national polls, has appeared stilted, Sanders has come across as authentic. This is reflected in Clinton’s honesty and trustworthiness polling numbers.

“Evasion of any sort is Hillary Clinton’s enemy at this point in time because she is compared with Bernie Sanders. Sanders has a style of directness,” said academic Kathleen Reardon, an authority on persuasion and politics in the workplace.

“Sanders has nothing to lose and she is in a position of having everything to lose. She has to be cautious and caution is often interpreted as not being forthright.”

Trump has, unlike Clinton, no political filter, spewing vitriolic and sexist comments about his rivals and critics. “Look at that face! Would anyone vote for that?” he said, according to Rolling Stone magazine, about Republican candidate Carly Fiorina this week. (He later said he was referring to her “persona”.)

Trump’s penchant for self-aggrandisement and bruising put-downs were honed on entertainment TV – a medium which, we saw this week, doesn’t come as easy to Clinton or Bush.