Chelsea Manning jailed for refusal to testify to grand jury 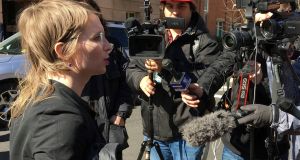 Former US army intelligence analyst Chelsea Manning was jailed on Friday after a federal judge in Alexandria, Virginia, held her in contempt for refusing to testify before a federal grand jury.

Ms Manning had appeared before the grand jury on Wednesday but declined to answer questions in connection with what is widely believed to be the government’s long-running investigation into WikiLeaks and its founder Julian Assange, citing her First, Fourth and Sixth Amendment rights under the US constitution.

She returned to court Friday for a hearing and Judge Claude Hilton of the US District Court for the District of Virginia considered the legal arguments Ms Manning used to justify her decision to defy the grand jury subpoena.

Ms Manning’s communications team released a statement saying the judge said she would be detained until she either co-operated or the grand jury finished its term.

It is unclear exactly why federal prosecutors want Ms Manning to testify, although her representatives say the questions she was asked concern the release of information she disclosed to the public in 2010 through WikiLeaks.

Ms Manning was convicted by court-martial in 2013 of espionage and other offences for furnishing more than 700,000 documents, videos, diplomatic cables and battlefield accounts to WikiLeaks while she was an intelligence analyst in Iraq.

Former US president Barack Obama, in his final days in office, commuted the final 28 years of Ms Manning’s 35-year sentence.

WikiLeaks founder Julian Assange, who has been a longtime target of a criminal investigation in the United States, had promised to accept extradition if Manning was freed.

Mr Assange has been living in the Ecuadorean Embassy in London since 2012.

A document that prosecutors say was filed in federal court last year by mistake appeared to show that federal authorities already have obtained a sealed indictment against Mr Assange.

After journalists discovered the document, prosecutors declined to either confirm or deny that a sealed indictment had been issued by the Alexandria-based grand jury, which has been hearing evidence on Mr Assange and WikiLeaks for years. – Reuters