There are different views about how long any conditional extension might be, with most countries favouring two to three months 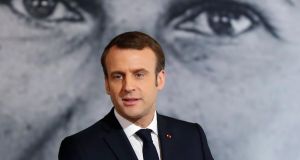 President Emmanuel Macron of France. He feels any UK extension would have to be conditional on a satisfactory explanation from May as to what she will do with the extra time. Photograph: Reuters

The prospect that the UK will seek an extension to the Brexit negotiation process, whether or not a deal can be sealed by British prime minister Theresa May in the next few days, has risen significantly.

Ambassadors from the other 27 EU states have begun to consider the ramifications of what will be far from an automatic process.

An extension under article 50 prior to the UK’s departure may be requested by the UK, but an extension and its duration must be approved unanimously by the 27 – the simple act of the House of Commons next week demanding more time will not make it happen.

Under one scenario, the process is likely to be straightforward and uncontentious. Should May secure support for the withdrawal agreement and seek time to pass the implementing legislation – what has been called a “technical” extension – then approval from the 27 is likely to be easily forthcoming.

However, what makes ambassadors and EU leaders nervous is the likelihood of a demand from the UK in the event of May being defeated of more time either to renegotiate a deal or to put the issue to a second popular ballot.

France’s President Emmanuel Macron has publicly made clear what many leaders feel, that such an extension would have to be conditional on a satisfactory explanation from May – who is increasingly distrusted in Europe – as to what she will do with the extra time, and that it will result in a definitive decision about UK membership one way or another.

Such an assurance will be far from easy as May has clearly not got control of her parliament. And leaders have seen how MPs have been willing to run down the clock to defer decisions, and fear that an extension will simply allow further indefinite prevarication.

There are different views about how long any conditional extension might be, with most, including Ireland, favouring only two to three months, while Germany is reported to have suggested nine months to the end of the financial year.

A suggestion for a 21-month extension – effectively to the end of and replacing transition – is reported to have been floated by European Commission secretary general Martyn Selmayr, but is widely seen as a ploy to scare Brexiteers into voting for the withdrawal agreement for fear that Brexit might be indefinitely postponed.

One major complicating factor is the European Parliament elections due on May 23rd.

The prospect of having to contest these if the UK is still a member, if only to elect very temporary members, fills British politicians with dread – not least because the board could potentially be swept by Brexit-supporting candidates, further destabilising the mainstream parties and injecting a dangerous new dynamic into the incomplete Brexit process.

Should the UK’s extension to article 50 last beyond May 23rd, or more significantly July 1st, the treaty requires that MEP elections take place in the UK.

It is argued by some that were these not to take place the new parliament – which will meet for the first time on July 2nd – might be deemed by the courts to be improperly constituted, and if so its acts might all be declared illegal.

Yet while all are agreed that the elections are mandatory for the UK if it is still a member, the legal services of the EU institutions have come to a common, less cataclysmic interpretation. They agree that to suggest that one member state should be able hold the parliament hostage by refusing to conduct elections would be so absurd as to be legally unarguable.

That means crucial early tasks for MEPs – such as approving a European Commission president and interrogating a new batch of nominated commissioners – should be able to carry on uninterrupted despite the British limbo.

Ultimately, however, the courts would almost certainly be asked to decide the issue, if only by disgruntled voters in the UK deprived of their vote. Former Ukip leader Nigel Farrage is said to already have briefed his lawyers.

Should the UK decide not to contest the polls, it is likely that after July 2nd the commission would, as the defender of the treaty, be under an obligation to take infringement proceedings to prove the UK was responsible for depriving citizens of their rights.

Some have argued the alternative to the UK conducting elections would be for the British government to simply nominate people to fill the vacancies, as happens at present in the gap between new states joining, most recently with Croatia, and the next European election. Not so, say EU lawyers.