Nick Reed is a Paradise, California resident. His home is one of the more than 6,000 destroyed by the fire. He drove through his neighbourhood to view the damage and to help give his neighbours a sense of closure. Video: New York Times 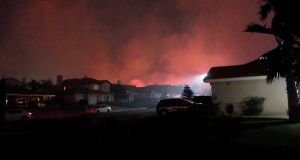 The wildfire raging in northern California spread on Wednesday as National Guard troops were called in to search for victims while firefighting crews received a little help from the weather in their battle against the deadliest blaze in the state’s history.

The death toll from the Camp Fire remained at 48 overnight but the fire grew 5,000 acres to 135,000 (55,000 hectares), even though diminished winds and rising humidity on Tuesday had allowed firefighting crews to set up containment lines.

The fire, in Butte County about 280km north of San Francisco, remained about 35 per cent contained after burning for nearly a week.

A National Guard contingent of 100 military police trained to seek and identify human remains was going into Paradise, a town of about 27,000 in the Sierra foothills that has been reduced to little more than embers and ash by the Camp Fire. They were joining coroner-led recovery teams, cadaver dogs and forensic anthropologists already searching the ghostly landscape.

Stewart Morrow, an official of the California Department of Forestry and Fire Protection (Cal Fire), was assessing damage to homes in Paradise, comparing piles of charred rubble where houses once stood with online photos of the structures before the fire. He also was keeping an eye out for human remains.

“I’ve been a firefighter for 20 years and I’ve never seen a place so destroyed,” Mr Morrow told Reuters on Wednesday. “It’s unreal.”

A group of three law firms representing multiple victims of the Camp Fire has filed a lawsuit against Pacific Gas & Electric alleging PG&E failed to properly maintain and replace its equipment and that “its inexcusable behaviour” contributed to the cause of the Camp Fire.

I just approved an expedited request for a Major Disaster Declaration for the State of California. Wanted to respond quickly in order to alleviate some of the incredible suffering going on. I am with you all the way. God Bless all of the victims and families affected.

Returned to my house in Malibu after evacuating. Heartbreaking time across California. Inspired as ever by the courage, spirit and sacrifice of firefighters. Thank you @LAFD. If you can, support these brave men and women at https://t.co/ei7c7F7cZx. pic.twitter.com/AcBcLtKmDU

US interior secretary Ryan Zinke and California governor Jerry Brown were scheduled to tour the area, as well as the site of the Woolsey Fire, where two people have died about 64km west of Los Angeles. US president Donald Trump has declared both to be disaster areas, making federal emergency assistance more readily available.

Wind-driven flames roared through Paradise so swiftly that residents were forced to flee for their lives with little or no warning.

Nearly 230 people have been listed as missing, but on Tuesday night Butte County sheriff Kory Honea said those numbers were highly fluid as some individuals may simply have fallen out of touch during chaotic evacuations.

The Camp Fire, fed by drought-desiccated scrub and fanned by strong winds, has capped a catastrophic California wildfire season that experts largely attribute to prolonged dry spells that are symptomatic of global climate change.

Anna Dise, a resident of Butte Creek Canyon west of Paradise, told KRCR TV that her father, Gordon Dise (66), was among those who died. They had little time to evacuate and their house collapsed on her father when he went back in to gather belongings.

Ms Dise said she could not flee in her car because the tyres had melted. To survive, she hid overnight in a neighbour’s pond with her dogs.

Josh Campbell of Cal Fire told KRCR TV early on Wednesday, however, that in at least one instance the strong wind gusts in a canyon near the city of Chico, not far from Paradise, were actually helping by slowing the spread of the fire.

“This gives us the opportunity to construct our lines, so we can be ready for the fire and put it out,” he said.

The Woolsey Fire was the worst of a flurry of blazes in Southern California, where it killed two people, destroyed more than 400 structures and displaced about 200,000 people in the mountains and foothills west of Los Angeles.

The fatality count of 48 from the Camp Fire far exceeds the previous record for the greatest loss of life from a single wildfire in California history – 29 people killed by the Griffith Park fire in Los Angeles in 1933.

The origins of both fires are under investigation. Utility companies Southern California Edison and Pacific Gas & Electric reported to regulators they experienced problems with transmission lines or substations in areas around the time the blazes were first reported.