‘We must stand united’ against rogue builders, says mother of balcony collapse victim 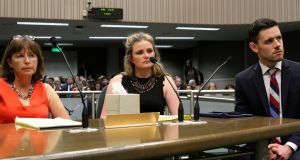 A little over a year since the Berkeley balcony collapse that killed six students , California Governor Jerry Brown has signed a new law aimed at increasing government oversight over construction companies.

Senate Bill 465 requires contractors to disclose past felonies and other crimes to state regulators within 90 days. An earlier version of the bill would have required them to disclose settlements stemming from civil lawsuits as well.

However, the law calls for the Contractors State License Board (CSLB) to study requiring builders to report any settlements or judgments stemming from faulty workmanship. The CSLB will then determine whether receiving legal settlement information on construction defect cases would be useful in their role of protecting the public.

Irish students Olivia Burke, Eoghan Culligan, Lorcán Miller, Nick Schuster and Eimear Walsh, all 21 years old, and Ms Burke’s cousin Ashley Donohoe (22), from California, died when the fourth-floor balcony they were standing on collapsed during a 21st birthday party in the early hours of June 16th, 2015.

The balcony collapse occurred during a birthday celebration for Ms Beary, who testified before the Senate last month and implored lawmakers to pass new laws governing construction standards.

In the aftermath of the deaths, it was discovered that Segue Construction, the lead contractor of the apartment where the incident happened, had previously been involved in legal settlements totalling more than $26 million (€23 million).

The new legislation was introduced by Democratic Senators Jerry Hill and Loni Hancock - with strong support from Jackie Donohoe, mother of Ashley Donohoe - and was approved unanimously last month by both chambers of the California legislature.

In a statement afterwards, Jackie Donohoe welcomed the signing of the bill saying: “It is my hope that this bill will ultimately force changes to the building codes and require stricter standards for balcony construction.”

She said: “There have been previous balcony collapses as a result of dry rot and poor construction both in California and nationally, including the recent collapse at Trinity College in Connecticut. The Berkeley balcony collapse at ‘Library Gardens’ that killed my daughter was not an isolated event.

“These tragedies are repeat catastrophes that can be prevented. We must stand united against the construction industry’s special interest agenda to prevent these proposed changes.

“While we are now one step closer to the action that could help prevent this tragedy we are still not done yet,” she added, citing a need for further legislative reform in the United States.

Although several lawsuits have been filed in connection with the balcony collapse, District Attorney Nancy O’Malley decided against filing any criminal charges.

The signing event was attended by Minister of State for the Diaspora Joe McHugh. He paid tribute along with Minister for Foreign Affairs and Trade Charlie Flanagan to the families of those killed and injured for bringing about the change in law.

“This change to the law, which is aimed at preventing future accidents by improving standards, would not have been possible without the pressure which they brought to bear and the brave testimony which they gave in the course of the lengthy legislative process,” said Mr Flanagan.

“Their tireless efforts and engagement - led by Jackie Donohoe and assisted by the Irish Consulate in San Francisco - made a vital difference in countering opposition and ensuring the unanimous support of both houses of the California State legislature.

“This legislation is but one step in a broader process which the Irish Government hopes will ensure that no other family has to endure the loss and injury suffered by our students, their families and friends in Berkeley a year ago.”