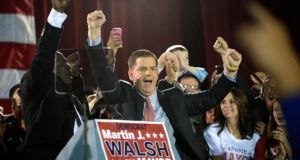 Boston’s Irish-American mayor Marty Walsh has announced plans for a 10-day visit to Ireland in the autumn. Mr Walsh, whose parents hail from south Connemara, is planning to visit a number of cities from September 19th along with visits to his relatives in Galway.

A spokeswoman for the mayor said that the visit was a business trip but that he hoped to visit family during his time in Ireland. Mr Walsh’s mother Mary comes from Rosmuc and his late father John came from Carna. It will be Mr Walsh’s first visit to Ireland since he became mayor at the start of the year after his election late last year.

“The overall goal of this trip is to support Boston’s economic development through building relationships and strengthening our commercial and cultural link with Ireland,” a spokeswoman for the mayor told Boston Irish Reporter newspaper.

The newspaper reported that Mr Walsh is planning to spend time with relatives at the start and end of his trip and that he will visit Donegal, Derry, Belfast and Dublin between September 23rd and 26th. His spokeswoman confirmed the planned trip to The Irish Times but said that the mayor’s exact schedule was still being organised.

Mr Walsh has spoken fondly of summers spent visiting family in south Connemara. “I loved it there: planting cabbage or sowing potatoes in the fields, feeding the chickens or fishing on the pier,” he told the ‘Boston Globe’ after he was elected in November 2013.