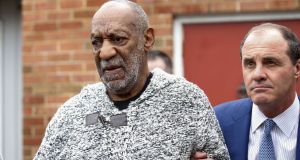 Bill Cosby leaving the courthouse in Elkins Park, Pennsylvania after his arraignment on charges of aggravated indecent assault over an incident that took place in 2004. It was the first criminal charge filed against the actor after dozens of women claimed abuse. Photograph: Kena Betancur/AFP/Getty Images 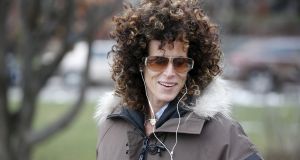 Andrea Constand, who accuses Bill Cosby of sexually assaulting her in 2004, walking in a park in Toronto, Canada on Wednesday. Photograph: Mark Blinch/Reuters

He was her mentor and one of the most famous people to have attended Temple University, Pennsylvania, where she worked as a director of operations for the women’s basketball programme. One night in the winter of 2004, Bill Cosby called Andrea Constand on her mobile phone and invited her to his home in Cheltenham, a leafy suburb just north of Philadelphia. The two chatted about her job and career prospects.

Much else of what occurred that night is in dispute and will be the focus of the criminal case against Cosby, the US comedian who was charged on Wednesday with aggravated indecent assault by prosecutors in Montgomery County, Pennsylvania. Did he supply her pills, as he says, to help her relax or, as investigators contend, to make her more pliable? Was the sexual contact between them romantic and consensual, as he has testified, or did it occur while she was incapacitated, as the criminal complaint indicates, leaving her feeling isolated and afflicted with nightmares?

While dozens of women have come forward with accusations of sexual misconduct by Cosby, the Constand case is unique, not only because it is the singular case that has resulted in criminal charges but also because there exists so many documentary, albeit conflicting, accounts of what took place.

There is a handwritten statement Constand gave to investigators in 2005, her federal lawsuit filed later that year and Cosby’s own words, spoken during four days of sworn testimony in that suit in the autumn of 2005 and the spring of 2006.

According to Constand’s account, Cosby had told her that they would be alone at his home that night and that she should wear comfortable clothes. He was in a sweatsuit when she arrived just before 9pm. When the conversation turned to career matters, she told investigators, she remembered feeling stress. She felt “drained”, she said, and “emotionally occupied”. She went to use the bathroom, she said, and Cosby fetched three blue pills for her. She recalled that he told her it was herbal medication.

“The blue things will take the edge off,” she recalled him saying, and then he directed her “put them in your mouth”. She did, telling Cosby that she trusted him, she told investigators. Also at Cosby’s insistence, she said she took some sips of wine, only to find 20 to 30 minutes later that her vision had blurred, she had difficulty speaking and her legs felt “rubbery”.

In his account, Cosby suggested his role in providing the pills was protective, not predatory. He recounted in testimony he gave in March 2006 at the Rittenhouse Hotel in Philadelphia that the blue pills were actually Benadryl, which he said he thought “might help take some of the stress and tension away”. He gave her 1.5 pills, split into three halves, he said.

After some more chatting, he said, “we began to neck and we began to touch and we began to feel and kiss and kiss back”. After moving to a living room sofa and assuming what he called “a spooning position”, Cosby said, the contact became more intimate. “I go inside of her pants,” he said, adding: “She then took her hand and put it on top of my hand to push it in further.”

After more contact and a sound from Constand that he assumed was an orgasm, he testified, he asked her to “please take a nap”, then went upstairs and set his alarm clock. When he returned, he said, a few hours later, he was surprised to find Constand awake.

“I said in sort of a chastising way, I thought you were going to go to sleep,” he said, during his deposition. Constand’s version of the encounter could not be more different. Yes, Cosby had led her to a sofa, she said. But already she said she could not move or speak. She described herself as “frozen”, as “paralysed”, while he fondled her breasts, penetrated her vagina with his fingers and placed her hand on his erect penis.

Constand’s mother later told investigators that her daughter “had sleep disturbances that included nightmares and instances in which she would scream in her sleep”. But in his deposition, Cosby consistently characterised the meeting as a consensual encounter. He recalled giving Constand a blueberry muffin and going into what he called his cappuccino room to make her a cup of Red Zinger tea. They talked briefly, he said, before she left.

Cosby said he didn’t think his behaviour had upset her. “She is not asking me a darn thing in a negative,” he said in the deposition. “She’s giving no viewpoint of anything negative having happened to her. And I sat there and I watched her eat the muffin.” Constand’s memory of the aftermath was decidedly different. In her lawsuit, she said she lost consciousness until about 4am and awoke feeling raw around her vaginal area. Her clothes and undergarments were in disarray, she remembered, and she recalled Cosby appearing, wearing a robe.

She, too, remembers the muffin. Cosby handed it to her, she said, then walked her to the front door, opened it and said simply “all right”. She told investigators that she then left, without saying a word.