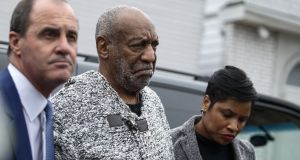 Comedian Bill Cosby was yesterday charged with sexually assaulting a woman in 2004 after plying her with drugs and alcohol. This marks the only criminal case against the performer whose father-figure persona was damaged by dozens of misconduct accusations.

Hours after the charge was filed Cosby (78) arrived with two individuals believed to be his lawyers at a courthouse in Elkins Park, Pennsylvania for a brief hearing before a magisterial district judge.

Cosby posted $1 million bail, turned over his passport and indicated in court that he understood questions that were posed to him. The judge instructed Cosby to present himself to the police station in nearby Cheltenham Township for fingerprinting and booking.

The entire proceeding lasted for several minutes and Cosby, walking with a cane, emerged from the courthouse to climb back into the black SUV that brought him to the hearing and was driven away.

“Today, after examination of all the evidence, we are able to seek justice on behalf of the victim,” Kevin Steele, the newly elected district attorney for Montgomery County, told an earlier news conference. Steele made a campaign issue of his intent to prosecute Cosby. The alleged victim in the case, Andrea Constand, a former basketball team manager at Temple University in Philadelphia, Cosby’s alma mater, is one of more than 50 women who have publicly accused the star of sexually assaulting them in incidents dating back decades.

Neither Cosby nor his representatives could be reached for comment.

He and his lawyers, while acknowledging marital infidelity on Cosby’s part, have consistently denied allegations of sexual misconduct.

The charge was filed just before the statute of limitations deadline for a criminal prosecution was to expire in January. The charge stems from allegations brought by Ms Constand, who settled a civil case against Cosby for an undisclosed sum in 2006.

According to an affidavit accompanying the charge, the victim was a guest at Cosby’s home in Cheltenham, near Philadelphia, one evening in January 2004, when he gave her wine, urged her to take three blue pills, and then sexually assaulted her.

Ms Constand declined to speak to reporters gathered outside her home in Toronto. Her lawyer, Dolores Troiani, issued a statement thanking the district attorney’s office, adding: “In that this matter is now being pursued in the criminal justice system, we will not comment further.” – (Reuters)