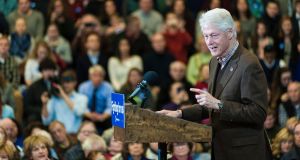 Bill Clinton, the famous Big Dog of US politics, seemed to be on a tight leash on Monday as he delivered a low-key and, at times, disjointed speech at a rally for Hillary Clinton during his first solo swing in New Hampshire.

Clinton, who was criticized for overshadowing his wife in 2008 with his attacks on Barack Obama, was decidedly restrained in his remarks about her rivals this time as he stuck mostly to describing his wife’s policy positions and biography. While he did say that some of this year’s presidential candidates were “kind of scary,” he did not name names.

He passed on answering one reporter’s question about Donald Trump, the leading Republican candidate who has taunted the Clintons recently over Bill Clinton’s history of extramarital affairs, but then he answered another’s query about whether his own past was fair game to discuss in the race.

“The Republicans have to decide who they want to nominate,” he replied. “I think there’s always attempts to take the election away from people, so I’m just going to give it to them.” Clinton did not just keep his well-known temper in check, he even stopped shaking hands and signing autographs after 15 minutes on the rope line, a place he has been known to spend an hour. It was one of several signs that, at least for this first trip, that he was willing to play the role of supporting actor opposite his wife’s starring role.

If Clinton had a theme, it was portraying Hillary Clinton (and himself) as high-minded advocates of “inclusive” policies, an adjective he repeated several times, rather than exclusionary proposals such as Trump’s call for temporarily banning Muslims from entering the US.

“I don’t fit anymore,” Clinton said about the current political climate. “First of all, I’m a happy grandfather. I’m not mad at anybody.” Describing the ideas and work ethic of immigrants as potential “meal tickets” for the US economy, he told some wandering anecdotes about Muslims and others who had stood up for Christians and defended their families. “We don’t want to run away from the place we’ve been, the place that welcomes all people,” he said in his most direct implicit shot at Trump.

Clinton was discursive as he moved back and forth from talking about his own presidency and the work of his foundation, which he mentioned a few times, to his wife’s candidacy and ideas. At one point he indicated that he was wrapping up the speech, but then began a lengthy description of Hillary Clinton’s years of work in Arkansas and elsewhere to improve education for children and opportunities for low-income people and women.

“She hadn’t been elected to anything,” he said. “She was just a change maker.” And he had a warning for the audience of several hundred people at Nashua Community College, urging them not to take lightly the controversial policy ideas and harsh political language from some of presidential candidates.

“They’re telling you what they believe – you’ve got to take them seriously,” Clinton said. “Almost everybody goes into the White House with the best of intentions. Whether they succeed or not depends upon whether their instincts, their experience, their knowledge, and their psychological makeup fits the times,” he added. “I do not believe in my lifetime anybody has run for the job who is better qualified by experience, knowledge and temperament” than Hillary Clinton.

Several voters said after the speech that they were struck by Clinton’s relatively muted style, but added that they were impressed that he kept much of the focus on his wife and did not upstage her in any unwelcome ways. “He was low-key in a down-to-earth way, which I think is the right thing to do, because the limelight should be on Hillary,” said Gail DuFresne (59) a nurse from Rindge.