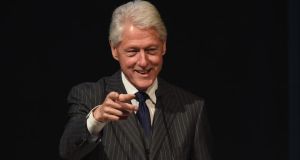 Former US president Bill Clinton has insisted that criticism of his family’s charitable foundation is nothing more than “politicking” during an election campaign, but said that he would no longer accept payment for speeches if his wife, Hillary Clinton, becomes president.

The Clintons and their money have drawn intense scrutiny, particularly since April, when Mrs Clinton announced her second bid for the White House.

Their Clinton Foundation has raised some $2 billion (€1.7 billion) since its inception in 2001. Some has come from foreign governments with an interest in influencing US policy at a time when Mrs Clinton was secretary of state from 2009 to 2013.

The Clintons have drawn fire too for earning $25 million in speaking fees since 2014. The money was disclosed at a time when the former first lady is trying to cast herself as a champion for everyday Americans in a campaign that ranks economic inequality as a top priority.

Mrs Clinton’s campaign chairman, John Podesta, was photographed this week taking the bus from New York to Washington, DC, a cheaper option than a train or plane. This choreographed media opportunity was intended to counter a perception that Mrs Clinton is running an out-of-touch campaign.

Speaking at a meeting in Denver of the family’s think- tank, the Clinton Global Initiative, Mr Clinton defended the family’s fundraising.

“Has anybody proved that we did anything objectionable? No. Have we done a lot of good things with this money, yes,” he said in an interview with Bloomberg Television on Wednesday.

The money was handed over when Algeria was lobbying the State Department on the country’s human rights record.

“Two days after the Haiti earthquake, with all the money coming in and people still buried under the rubble, there are few countries in the world I would not accept for help to Haiti,” he said.

Mr Clinton was asked whether he would continue to accept money for speeches if his wife wins the presidency in 2016. “I don’t think so,” he said. “I’ll still give speeches on subjects I’m interested in.”

Conservative writer Peter Schweizer, a former speechwriter for George W Bush, investigated ties between the Clinton money and policy decisions during Mrs Clinton’s time as secretary of state in a book published in May.

Mrs Clinton’s campaign team dismissed the book as a “smear project” and said that Mr Schweizer produced no evidence that personal decisions she made at the State Department helped donors to the family’s charity.

His allegations were undermined by changes made by the publisher to the original book just weeks after it was released.

Mr O’Brien’s spokesman, James Morrissey, has said that the businessman was not involved in getting the book changed.