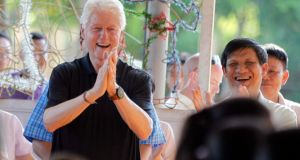 The thing about him is, he just keeps going.

At 67 he continues to be, as Anna Quindlen once wrote, like one of those inflatable toys with sand weighting the bottom – you knock him over and he pops back up.

The women, the cheesy behaviour, the fundraising excesses, the self-pity, the adolescent narcissism, the impeachment, the charges of racially tinged insults against Obama in 2008, the foundation dishabille – all that percussive drama has faded to a mellow saxophone riff for many Americans.

Most admired
A recent Wall Street Journal/ NBC News/Annenberg centre poll showed that Clinton was, by a long shot, the most admired president of the last quarter-century. A new YouGov poll finds that among the last eight elected presidents

Clinton is regarded as the most intelligent and George W Bush the least.

(Clinton and W both should have been more aggressive in catching Osama. But certainly, if Clinton had been president post-9/11 there would have been no phony invasion of Iraq, and Katrina would have elicited more empathy.)

A Washington Post/ABC News poll in May found Bill’s approval ratings rebounding to the highest they had been since early in his presidency. Even some who used to mock his lip-biting have decided that warmth, even if it’s fake at times, beats real chilliness.

Speaking at the 92nd Street Y last month, Bill O’Reilly was asked by Geraldo Rivera whether the country would have been better off electing Hillary instead of Obama.

Except for LBJ and Nixon, ex-presidents tend to grow more popular. Yet Bill Clinton, wandering the global stage as a former president who may return to the White House as the husband of a president, plays a unique role in American history. (Newly released Clinton library documents revealed that Bill, believing it punchier, preferred to use “America” and “Americans” in speeches rather than “the United States” and “people of the United States.”)

Showman
But why is he burning brighter now, when the spotlight should be on his successor and his wife?

Do we miss the days when the National Debt Clock was retired? Are we more accepting that politicians have feet of clay? Are we tired of leaders who act as burdened as Sisyphus? Do we miss having a showman and a show?

“Maybe they admire his vegan body,” said David Axelrod impishly, before replying seriously: “He’s the most seductive character that we’ve seen in American politics in our lifetime. He just has this unbelievably resilient and seductive personality.”

James Carville noted dryly: “People are confused. They don’t know which one they like more, the peace or the prosperity.” He calls Clinton the “anti-Putin,” someone who exercised power not to harm people but to help them.

US president 42 had greater strengths and greater weaknesses than the average pol.

Rand Paul accused Clinton of “predatory” behaviour. Liz Cheney told Politico’s Mike Allen that she trusts Hillary more than she trusts Bill, implying that was because of Monica Lewinsky. And Todd “legitimate rape” Akin defended himself on Fox News this past week by hitting Clinton’s “long history of sexual abuse and indecency.”

But Republican Party pollster Kellyanne Conway said the words “Monica” and “liberal” rarely come up when she polls about Bill Clinton. The words “global” and “philanthropic” come up. She said that after Clinton, people “shrugged their shoulders at what had once made them raise their eyebrows”.

“He was a good ambassador for the baby-boomer generation,” she said. “Who hasn’t screwed up? Who hasn’t had a third and fourth chance?”

Happy warrior
Perhaps, given the tribal wars in Washington and dark tides loose in the world, there’s a longing for Bill’s better angels: the h

appy-warrior desire to get up every day and go at it, no matter how difficult; the unfailing belief that in the future things will be better; the zest in the hand-to-hand combat of politics and policy, the reaching out to Newt Gingrich and other Republicans – even through government shutdowns and impeachment – and later teaming up with Bush snr.

“There’s a suspicion among a lot of people that Obama doesn’t much care for politics,” Carville said. “It’s amazing that a man can be so successful at something he really doesn’t like. It’s like if you found out that Peyton Manning didn’t like to play football.”

Mike Murphy, the Republican strategist, said that Obama’s fade has been “the best Clinton rehab.”

Murphy noted the irony that Bill first had to use his extroverted personality, his talent as Explainer in Chief and his “empathy ray gun” to help Obama get re-elected, and now he will need to use those skills to push another clinical, cerebral candidate – his wife – up the hill.

“The one guy he can’t help elect is himself because of that pesky constitution,” Murphy said. “But of course, that’s what he’d love to do.”