Investigators examine whether shoddy workmanship was behind fatal collapse 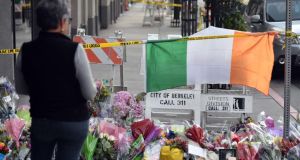 A woman views a memorial for the six Irish students who lost their lives after a balcony gave way in Berkeley, California. The balcony builder may face charges if investigators find shoddy workmanship caused the collapse. Photograph: Josh Edelson/AFP/Getty Images

Berkeley mayor Tom Bates has not ruled out making a criminal complaint to the county prosecutor if investigators find shoddy workmanship caused the apartment balcony collapse in which six Irish students died in California this week.

One of the first emergency service personnel to arrive on the scene said the aftermath resembled “a scene out of a movie.”

He arrived within minutes of the fourth-floor balcony collapsing during a birthday party early last Tuesday and found bodies “all over the place”.

“It was unreal,” he said, adding that he moved from student to student to see who was breathing and whether they reacted to him.

The scene would “stay fresh in my mind forever,” said the emergency official who didn’t want to be named.

Mr Bates said he would advise Alameda County District Attorney Nancy O’Malley to prosecute the building company that constructed the Library Gardens student apartment block on Kittredge Street in downtown Berkeley in 2007 if it was found not to have built the balcony properly.

He was speaking after it emerged that Segue Construction, the California firm which built the Library Gardens apartment complex, paid $3 million (€2.6 million) last year to settle a case over alleged defects in another apartment scheme.

California court records show the company paid the money to settle a legal action over defects found in the waterproofing of balconies.

Investigators at Library Gardens are continuing to examine wooden beams, which supported the fallen balcony, that appeared to have rotted or been damaged by water.

“It seems like there are a high probability that there could be some problems with water getting into the wood,” Mr Bates said.

The mayor warned against jumping to conclusions around the cause of the collapse and any actions that might follow as he awaits the investigation report into the tragedy that has shocked people in Ireland and California.

“If there are some grounds for some criminal actions, I would hope that the District Attorney would weigh that and make a decision on whether to pursue that,” he said.

Preparations are being made in California and Ireland for the repatriation of the remains of five of the students to Ireland.

The two cousins killed on Tuesday, Olivia Burke (21) and Ashley Donohoe (22), will have a joint funeral in Rohnert Park, a town north of San Francisco, Fr McAleenan told reporters after the memorial mass on Wednesday night. The funeral is expected to be tomorrow.

Irish priest Fr Alan McAleenan said at a memorial mass in nearby Oakland on Wednesday night that the families of the six Irish J-1 visa students killed on Tuesday had been unable to see the remains of their loved ones because of “red tape” at the Alameda County Coroner’s Office, which does not allow relatives access to see the remains.

Family members who travelled in from Ireland on Tuesday and Wednesday would get to see their loved ones yesterday, he said.