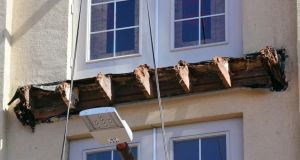 The broken wooden supports exposed after the collapse of a balcony in Berkeley in which Irish students died and seven others were seriously injured. Photograph: New York Times

A California licencing panel is to investigate the construction firm involved in building the Berkeley apartment balcony that collapsed last week, killing six people and injuring seven others.

This brings to three the number of separate investigations being carried out into the collapse in which six young Irish students died and seven were seriously injured.

The Alameda County District Attorney has begun civil and criminal investigations into the collapse and said the victims deserve for the matter to be “thoroughly and exhaustively investigated”.

The City of Berkeley has also investigated the collapse. This has resulted in changes to building regulations but no individual or entity was investigated. The city’s investigation is now closed.

Mr Flynn and Mr Fahey, both from Dublin, have been released from hospital in recent days.

The Contractors State License Board will select a team of industry experts to examine the balcony built by Segue Construction for workmanship and perform other forensic analysis, according to the agency spokesman Rick Lopes.

If a negative finding is made it could result in the revocation of the firm’s licence to operate in the state, he added.

The panel would also examine the builder’s previous work to determine past performance, Mr Lopes said.

In one case the panel will review, Segue paid $3.4 million to settle claims brought by a homeowners association of construction defects at another Bay Area apartment complex in 2013.

In this case the claims alleged that improperly sealed balconies became quickly subject to water intrusion, dry rot and instability.

Settling the claims meant the builder was not required to report the matter to the board, as it would be in the case of an adverse court judgment, Mr Lopes said.

“We were concerned to learn there may have been out of court settlements with gag orders,” Mr Lopes. “But those settlements don’t preclude the board’s ability to investigate.”

A representative for Segue was not available for comment.

“I would like to start by saying to the families, to those who lost their lives, to those who are surviving this tragedy and their loved ones, and our community at large, each of you deserve to have this matter thoroughly and exhaustively investigated,” said Ms O’Malley.

“We will do so, and that is the pledge I make from my office.”

She said the remains of the apartment balcony and another deck from that building where inspectors have noticed evidence of dry rot will be part of the evidence.

She said the investigation would involve the forensic examination of material – something which was outside the scope of the City of Berkeley’s investigation, which has concluded.

“We have got to make sure that whatever investigation we conduct and whatever findings we make before the final decision is made, that we are doing so not in the court of public opinion, but rather something that can be evaluated and brought into a court of law,” she said.

“This is a criminal investigation. There are multiple questions my office has to answer in order to determine whether or not the facts warrant criminal charges.

“As with any criminal inquiry, we will ultimately have to make the determination whether there are facts that support criminal charges, whether or not those charges could be proven beyond a reasonable doubt in a court of law.”

The nature of the investigation will centre on whether “criminal negligence” was committed, which she described as that which involves “more than just ordinary carelessness, inattention, or mistaken judgment”.

“Criminal negligence occurs when a person acts with negligence in a reckless way that creates a high risk of death or great bodily injury, and that a reasonable person would have known that that acting or conduct would have created such a risk,” she said.

“The negligence that we’ll be evaluating must be aggravated, must be culpable, must be gross or reckless, and it must be conduct that is such a departure from the conduct of an ordinary, prudent person, or careful person, under the circumstances as to be incompatible with protecting life.”

She also said that an individual who is deemed to have engaged in criminal negligence can be found guilty of involuntary manslaughter.

“Individuals can be prosecuted who are part of an industry,” she said. “There have been cases.

“We actually prosecuted a case many years back where a worker was killed because of the negligence of the owner conducting the business, and that owner was convicted of involuntary manslaughter.

“So that would be one example of someone who could be held liable, but we don’t know until we get into the investigation.”

Ms O’Malley said her office would also be pursuing civil charges and that outside experts would be brought in to assist.

“We’re looking at all of this from both a criminal and a civil perspective,” she said. “Our ability to move a case in a civil court is really from a consumer protection (point of view), and not necessarily representing individuals. We will be looking into that.

“We are looking at the case completely so we have lawyers who work in our civil division and investigators who do civil cases, as well as our criminal investigators. They would very likely forge in two different directions.

“We will bring in outside experts as well as those who work here. We are working with the state of California and the city of Berkeley to make sure we bring the best experts in to help us move this investigation forward.”

She said that as soon as the investigation is complete, her office will report its findings.

In the aftermath of last week’s tragedy, City of Berkeley officials have recommended changes to building regulations including a requirement that builders create an opening to the underside of enclosed balconies so that they can be periodically inspected.

The building inspectors also recommended that balconies exposed to weather and the structural beams of wood that support floors exposed to weather should be built of naturally durable wood, preservative-treated wood, corrosion resistant steel or similarly approved materials.