Barr confirmed as US attorney general in Senate vote 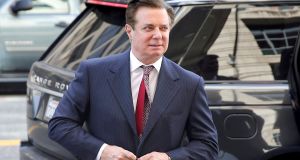 William Barr has been confirmed as the next attorney general of the United States, replacing Jeff Sessions who was fired by President Donald Trump in November.

Mr Barr, who served as attorney general during the George HW Bush administration, was confirmed by the US Senate in a vote on Thursday. Three Democrats – Joe Manchin of Virginia, Doug Jones of Alabama and Kirsten Sinema of Arizona – voted with Republicans to endorse him, though Republican Rand Paul voted against.

Mr Barr will take up the position at the helm of the department of justice at a crucial time for the special counsel investigation into Russian interference in the 2016 election. As Mr Trump’s nominee, he came under questioning during his senate confirmation hearing last month for suggesting that special counsel Robert Mueller’s final report may not be published in full when the investigation concludes.

Mr McCabe made the comments in an interview with ABC ahead of the publication of his memoir, which will be published next week.

Mr Trump also hit out at the former deputy FBI director, who was fired by Mr Sessions last year, a day before he was due to retire, describing him as a “disgrace to the FBI and a disgrace to our country”.

The former deputy to Mr Comey is under investigation by the FBI’s internal watchdog for improperly leaking information and is due to publish a new book next week.

Mr McCabe also confirmed a New York Times report last year that the FBI began investigating if the US president was working for Russia after the firing of Mr Comey and before the establishment of the special counsel investigation.

“I was very concerned that I was able to put the Russia case on absolutely solid ground in an indelible fashion that, were I removed quickly or reassigned or fired, that the case could not be closed or vanish in the night without a trace,” he said in the CBS interview.

The developments took place a day after Mr Trump’s former campaign manager Paul Manafort was found guilty of lying to prosecutors in breach of a plea deal he had reached with investigators.

The former lobbyist misled prosecutors about the nature of his contacts with a Russian intelligence operative, after agreeing to co-operate with them, a court in Washington heard on Wednesday. Judge Amy Berman Jackson agreed with the prosecution team that Mr Manafort had lied about three separate issues related to the Russia investigation, including his interactions with Konstantin Kilimnik, a Russian individual who has been indicted by the US and is suspected of being a Russian operative.

Mr Manafort’s breach of his plea deal means that he is likely to face a much tougher prison sentence than previously thought probable.

Mr Manafort pleaded guilty in September, on the eve of jury selection for his trial, to various crimes including conspiring to defraud the United States and the violation of lobbying laws. He is facing a separate set of charges in Virginia.

The 69-year-old has been in prison in Virginia since June, where he is being held in solitary confinement.

He is due to be sentenced by Judge Berman Jackson on March 13th.