Baby found dead after being abducted from California home 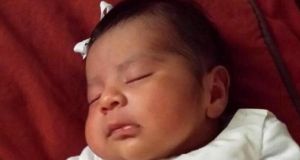 Police released a photograph of Eliza Delacruz in an attempt to locate her. Her remains were found on Sunday in San Diego

A 3-week-old baby abudcted from her home in Long Beach in the US on Saturday has been found dead in the San Diego area.

The identification of Eliza Delacruz came after detectives from Long Beach traveled to San Diego County to help authorities investigate the discovery of remains found in a bin behind an Imperial Beach strip mall.

There was no immediate word on the cause of death.Officials say police went to the home after receiving a call about the shooting and found two brothers and the baby’s mother with gunshot wounds. One of the brothers is the father of the child.

Police are now seeking an adult male in the shooting but have not said if the man is related to the baby.

Long Beach police spokeswoman Marlene Arrona says his motive is unknown but detectives do not believe the shooting was a random act.

Two victims remained hospitalised in critical but stable condition. The other was treated and released.

Authorities earlier had asked anyone who knew of someone bringing home an infant under suspicious circumstances to call the police.

Police released a photo that showed the child sleeping on a red blanket in a ruffled white dress with a white bow in her hair.