‘As he once put it, Muhammad Ali was America’ 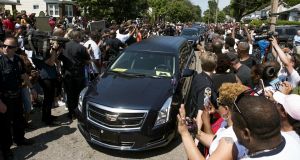 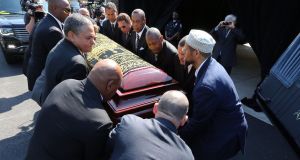 Pallbearers place Muhammad Ali’s casket in the hearse as it prepares to begin a procession through his hometown of Louisville, Kentucky. Photograph: Michael Clevenger/Reuters

Tens of thousands of people lined the route of Muhammad Ali’s funeral procession as the black hearse carrying “The Greatest” passed through his hometown of Louisville in Kentucky towards his final resting place.

The crowd fell silent as the car stopped and the people surged forward to touch the flower-strewn hearse and the hand of Hollywood actor Will Smith, one of Ali’s pallbearers who played him in the 2001 film biopic. Former boxing champions Lennox Lewis and Mike Tyson were among the other pallbearers.

The procession, running 90 minutes late, eventually made it to a private burial service attended by Ali’s family and friends at Cave Hill Cemetery in Louisville.

Afterwards,the life of one of the most famous people in the world was celebrated at a public memorial service at the KFC-Yum! Centre in downtown Louisville. About 15,000 people attended the interfaith service for the most famous Muslim American. Free tickets for the event went within 30 minutes.

The audience cheered hard and chanted “Ah-li! Ah-li! Ah-li!” after the first shout-out to the greatest son of Louisville, “the home of the people’s champ.”

Speaker after speaker praised not just Ali’s great sporting achievements but his heavyweight political advocacy, his deep humanity and his heart-swelling compassion for the oppressed and those at the margins of society.

Speaking words written by President Barack Obama, who could not attend, his senior adviser Valerie Jarrett told mourners: “The world flocked to him in wonder precisely because, as he once put it, Muhammad Ali was America – brash, defiant, pioneering, joyful, never tired, always game to test the odds.”

Ali’s widow Lonnie told mourners that her husband wanted his death to be a moment of teaching to the world, about never giving up and about peace.

“He wanted us to remind people who are suffering that he had seen the face of injustice, that he grew up in segregation and that in his early life he was not free to be who he wanted to be but he never became embittered enough to quit or engage in violence,” she said.

Fans of the boxer travelled from as far away as Malaysia and the UK to say goodbye to their hero.

Legendary boxing promoter Don King told The Irish Times that Ali was “so great at and famous for” reaching out and touching people of the world, not least because of the famous fights against George Foreman and Joe Frazier he staged in the 1970s.

Fans came from Ireland too. “He shook the imagination of the people of Ennis and Clare,” said acting mayor of Ennis, Pat Daly, who travelled to pay the county’s respects to the man who drew 30,000 people to Ennis on a visit in 2009. The boxer accepted the Freedom of Ennis as the great-grandson of Co Clare emigrant Abe Grady.

Clare was not the only Irish county represented. “I took a mad notion Saturday night,” said Liam Walsh, a two-time All-Ireland hurling winner for Kilkenny, explaining how he decided in his local pub back in Glenmore to travel to Ali’s funeral.

He had not slept since Tuesday, having flown to the US and driven to Louisville with his friend, Joe O’Shea, from New York. O’Shea had a treasured photograph of himself and Ali taken during a chance encounter on a Manhattan street.

“The things Ali would say and then do them. Jeez, if a hurler turned around said, ‘we’ll win tomorrow.’

“My God almighty just think of the furore,” said Walsh.