Adnan Syed, subject of podcast about 1999 murder of Hae Min Lee to return to court 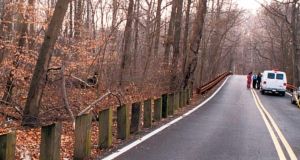 Syed is serving a life sentence after he was convicted in 2000 of strangling Lee when they were students at Woodlawn High School in Baltimore County. Lee disappeared, and her body was found almost a month later in a park. Photograph: Serialpodcast.org

A Maryland court has agreed to hear an appeal by Adnan Syed, the man whose murder conviction was investigated in the popular “Serial” podcast. Syed (34) has said that he is innocent of the 1999 murder of his former girlfriend, Hae Min Lee, and that he received ineffective legal counsel.

On Friday, the court issued an order saying it would review the case and scheduled a hearing for June. Syed’s lawyer, C Justin Brown, called the decision “a huge step forward in the fight to get Adnan Syed a new trial.” “We’re delighted that we have the chance to argue this before the Court of Special Appeals,” he said in a telephone interview Saturday.

“We have some very meritorious issues, and we look forward to the court considering them in the full.”

Syed is serving a life sentence after he was convicted in 2000 of strangling Lee when they were students at Woodlawn High School in Baltimore County. Lee disappeared, and her body was found almost a month later in a park. The case received renewed attention after it was featured on Serial, which became the fastest podcast to reach 5 million downloads. The podcast, which was seen as largely sympathetic to Syed, turned some listeners into armchair detectives who offered their own theories on what happened in the case or shared their search for clues on Internet forums.

As the podcast turned into a cultural phenomenon, even being parodied on Saturday Night Live, the legal case has continued to work its way through the courts. Syed’s request for an appeal argued that his trial lawyer, Cristina Gutierrez, had failed to follow up with a credible alibi witness and had not spoken to prosecutors about a plea deal, despite Syed’s wishes. The state of Maryland had asked the court this year to deny his request for an appeal.

On Saturday afternoon, Brown said that he had not spoken to Syed since Friday’s court order. “News travels fast, and it even travels through the prison, so I would not be surprised if he’s found out,” Brown said. “If not, I will be trying to contact him as soon as possible.”

The podcast, hosted by Sarah Koenig, a longtime producer on the radio program This American Life, began airing in October. In 12 weekly episodes, Koenig interviewed Syed over the phone and spoke with friends of his and of Lee’s, as well as with experts on the criminal justice system, among others.

On Saturday, Koenig posted an update on the court’s decision on the Serial website. During the podcast, she had said the appeal was “alive by a thread,” but she would now compare it to a “well-made string, maybe. Like the nylon kind.” The decision was significant, Koenig said, because the judges had agreed that the issues Syed raised were worth considering. The Court of Special Appeals had asked the state of Maryland to respond to the allegation that Gutierrez did not follow Syed’s instructions to inquire about a plea deal.

The state’s attorney general, Brian E Frosh, filed a response asking the court to deny Syed’s request for an appeal. Gutierrez had not acted inappropriately because the state would not have offered a plea deal, and Syed would not have agreed to one because he insisted on his innocence, the response said.

Syed’s lawyer also argued that Gutierrez, who has since died, failed to contact an important witness, another student named Asia McClain, who has said she was with Syed at a library around the time the murder was said to have taken place. McClain was willing to testify, but Gutierrez never contacted her, Brown said.