Anger as video emerges of fatal US police shooting

A US police video of officers confronting and then fatally shooting a black man in southern New Jersey has stirred anger over another death at the hands of police. Warning: Graphic content 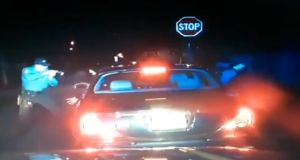 A screengrab showing the police stop during which Jerame Reid was fatally injured.

A US police video of officers confronting and then fatally shooting a black man in southern New Jersey has stirred anger over another death at the hands of police.

The video of the December 30th killing of Jerame Reid in Bridgeton, a struggling, mostly minority city of 25,000 people just south of Philadelphia, was released this week.

The nearly two-minute stand-off came after the killings of black men in New York and Ferguson, Missouri, triggered months of turbulent protests, violence and calls for a re-examination of police use of force.

Conrad Benedetto, a lawyer hired by Mr Reid’s wife to investigate, says the video footage “raises serious questions” about the legality and reasonableness of the officers’ actions because Mr Reid was shot as he raised his hands.