An open letter to Hillary Clinton on breaking the rules 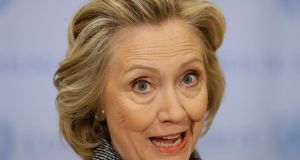 Hillary, you seem like an annoyed queen, radiating irritation at anyone who tries to hold you accountable. Photograph: Seth Wenig/AP

Since open letters to secretive and duplicitous regimes are in fashion, we would like to post an Open Letter to the Leaders of the Clinton Republic of Chappaqua:

“It has come to our attention while observing your machinations during your attempted restoration that you may not fully understand our constitutional system. Thus, we are writing to bring to your attention two features of our democracy: the importance of preserving historical records and the ill-advised gluttony of an American feminist icon wallowing in regressive Middle Eastern states’ payola.

You should seriously consider these characteristics of our nation as the Campaign-That-Must-Not-Be-Named progresses. If you, Hillary Rodham Clinton, are willing to cite your mother’s funeral to get sympathy for ill-advisedly deleting 30,000 emails, it just makes us want to sigh: okay, just take it. If you want it that bad, go ahead and be president and leave us in peace. (Or war, if you have your hawkish way.) You’re still idling on the runway, but we’re already jet-lagged. It’s all so drearily familiar that I know we’re only moments away from James Carville writing a column in David Brock’s Media Matters, headlined, “In Private, Hillary’s Really a Hoot.”

When you grin and call out to your supporters, like at the Emily’s List anniversary gala, “Don’t you someday want to see a woman president of the United States of America?” the answer is: Yes, it would be thrilling. But therein lies the rub. What is the trade-off that will be exacted by the Chappaqua Republic for that yearned-for moment? When the Rogue State of Bill began demonising Monica Lewinsky as a troubled stalker, you knew you could count on the complicity of feminists and Democratic women in Congress. Bill’s female cabinet members and feminist supporters had no choice but to accept the unappetising quid pro quo: The Clintons would give women progressive public policies as long as the women didn’t assail Bill for his regressive private behaviour with women.

None of what you said made any sense. Keeping a single account mingling business and personal with your own server wasn’t about “convenience”. It was about expedience. You became judge and jury on what’s relevant because you didn’t want to leave digital fingerprints for others to retrace. You could have had Huma carry two devices if you really couldn’t hoist an extra few ounces. You insisted on piggybacking on Bill’s server, even though his aides were worried about hackers, because you were gaming the system for 2016. (Or even 2012.)

Suffused with paranoia and pre-emptive defensiveness, you shrugged off The One’s high-minded call for the most transparent administration in history. It depends upon what the meaning of @ is. The subtext of your news conference cut through the flimsy rationales like a dagger: “You can have the first woman president. You can get rid of those epically awful Republicans who have vandalised Congress, marginalised the president and jeopardised our Iran policy. You can get a more progressive American society. But, in return, you must accept our foibles and protect us.”

That’s an uncomfortable echo of a Clintonian trade-off, which goes: “We’re going to give you the first woman president who will improve the country. Now leave us alone to break any rules we please.” Bill, your pathology is more human and interesting. It’s almost like you need to create messes to see if your extraordinary political gifts can get you out of them. It’s a fatherless boy’s “How much Do You Love Me?” syndrome. Do you love me enough to let me get away with this?

No Drama Obama and his advisers are clearly appalled to be drawn into your shadowy shenanigans, just as Al Gore once was. Whatever else you say about this president, he has no shadows. We hope this letter enriches your knowledge of our constitutional system and promotes mutual understanding and clarity as the campaign progresses. Sincerely, America. – (New York Times)