An affair to misremember – but where is the truth in a world of unreliable narrators?

‘The Affair’, starring Dominic West, is the classic scenario of he said she said 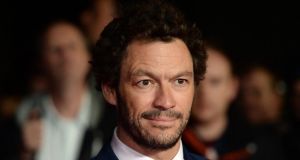 British actor Dominic West: after playing Iago and the English serial killer Fred West, he yearned for a more heroic role. “I was really keen to play a good guy, so this is the good guy I’m playing – a cheating husband.” Photograph: Facundo Arrizabalaga/EPA

So now comes the riveting Rashomon in Montauk, Showtime’s The Affair, with Ruth Wilson and Dominic West offering alternating he recalls – she recalls versions of the same story in each show, as they get swept up in sexual infidelity and a serious crime during a shimmering summer.

I went to Brooklyn to talk to West, the British actor who played the raffish Baltimore detective Jimmy McNulty in The Wire on HBO – and the show’s co-creator, Sarah Treem, as they shot scenes at a school there.

West’s character, Noah, is a novelist and teacher who lives in a Brooklyn brownstone with his wife, played by Maura Tierney, and four kids. He is happily married but feeling insecure about the lacklustre performance of his first novel.

It gets worse when his wife giggles at his facial expression during lovemaking and he is taunted by his arrogant father-in-law, a famous fiction writer who owns the ocean-front mansion in the Hamptons where the family is spending the summer.

When West meets Wilson’s comely Alison, a diner waitress and Montauk native who is also married to someone she loves (Joshua Jackson) and also feeling uncertain and anxious, the chase is on. But who’s chasing whom? In West’s memory, Alison is sultry and curvy, wearing sexy outfits and seducing him. In Alison’s version, she is wan and withdrawn, still mourning the drowning death of her small son and dubious about Noah’s aggressive blandishments.

Treem, a playwright and House of Cards writer, created The Affair with Hagai Levi, with whom she also worked on HBO’s In Treatment. She says the new show uses sex to illustrate that the characters are “trying to connect and they fail at it all the time. I think we have a lot of sex in this show, but in terms of the sex where they’re actually unified, that happens very rarely.”

Treem is a newlywed. In June, she married Jay Carson, a former campaign spokesman for Howard Dean and Hillary Clinton, who is a producer on House of Cards and the father of Treem’s son, who is nearly two. Yet the brainy, alluring 34-year-old has an intriguingly jaded philosophy of romance.

She says they put up a quote by the poet Robert Hass in the writers’ room, the final line of a passage where he describes the sensation of making love to a woman: “I felt a violent wonder at her presence like a thirst for salt, for my childhood river with its island willows, silly music from the pleasure boat, muddy places where we caught the little orange-silver fish called pumpkinseed. It hardly had to do with her. Longing, we say, because desire is full of endless distances.”

I tell her that Carson asked me if he should be worried, given how knowingly his wife writes about infidelity. She laughs. “I wrote the show when I was still single at 31, so at that point in your life you see a lot of infidelity. You have married men coming on to you. You see your friends already in affairs.

When I ask her if she thinks that men are more prone to cheat, she instantly replies: “Yes, I do.”

West agrees that the show may be “a shag-a-thon”, as he merrily put it, but says its real subject is meant to be marriage.

“When you have four kids, inevitably your sex life suffers,” he says, himself a father of four, “but, for me, in my 20s and 30s, the stakes are much higher if you’re unfaithful. I feel, as you get older, the stakes get a lot lower. I don’t think infidelity would bother either me or my wife so much as if anything happened to our children, for instance. It ceases to be the primary anxiety.”

When I mentioned that it was interesting how, in Noah’s remembrance, Alison has fuller breasts, West’s eyes widened in surprise. “Does she?” he says, laughing. “Is that right? Well spotted.”

He says that after playing Iago and the English serial killer Fred West, he yearned for a more heroic role. “I was really keen to play a good guy,” he adds, with a wry smile, “so this is the good guy I’m playing – a cheating husband.” – (New York Times service)