American Letter: Siberian Express socks it to much of America 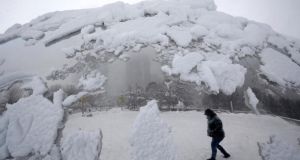 A woman is reflected in the snow-covered sculpture “Cloud Gate” as she walks through Millennium Park during blizzard conditions in Chicago. Photograph: Reuters/Jim Young

Last year it was the Polar Vortex. This year it is the Siberian Express, cold Arctic air from northern Russian that is blasting large parts of the eastern US with record- breaking low temperatures, snow and ice as far as south as the Gulf of Mexico. There have been a reported 15 weather-related fatalities.

More than 100 million Americans are affected by this horrific icy weather, but none more so that the people of Boston and New England. Almost 99 inches (2.5 metres) of snow have fallen in Boston this winter, edging the city closer to its snowiest season ever – 1995-96, when 107.6 inches of snow fell.

February is already Boston’s snowiest month on record, with almost five feet falling. More than 76,000 tonnes of salt have been sprinkled on Boston roads and more than 287,000 miles of snow ploughed.

Photographs have gone viral of great walls of snow and drifts covering houses around Massachusetts in eight feet of thick white quilts of snow. Stoic homeowners have shared photos showing them digging deep caverns and tunnels to escape their houses and narrow trenches to save their cars.

“This isn’t Loon Mountain, this is the city of Boston, where we’re trying to remove snow off the street and it becomes very dangerous,” said Walsh. “And the last thing we want to do is respond to an emergency call where somebody jumped out of the window because they thought it was a funny thing to do.”

The snow has generated a macho debate about who in the US are the most hardy and the most delicate in the face of this icy challenge.

The nation’s capital appears to win the award for the wussiest. Washington hasn’t even had a tenth of the amount of snow crippling Boston, yet it came to standstill on Tuesday with just a few inches. The early-morning Metro bus service was cancelled, rail was put on a limited service, and government workers were ordered to work from home.

Boston restaurateur Andy Husbands, owner of Tremont 647 in the South End, has yet to close his doors this winter. He told the Washington Post this week that DC needed to “man up” and deal with the snow.

Post reporter Joe Heim drew brilliant comparisons between Bostonian fortitude and Washingtonian frailty in the article. “If snow was sand, everyone in Boston would be dead,” he wrote, while Washington was bare coping with “another piddling snowfall.”

Washington certainly has a history of being unable to cope with even a light dusting. The city’s schools closed on Tuesday when temperatures felt like -3 degrees Celsius, yet in Syracuse, New York schools remained open despite temperatures of -19 degrees.

The extreme snow in Boston has closed schools for eight days so far, understandable when little Tommy and Mary can’t actually get beyond the wall of snow at their front door.

Chicago schools, meanwhile, have battled on through some of the country’s coldest wind chills, as the city’s own Barack Obama noted early in this presidency.

“My children’s school was cancelled today,” Obama said in January 2009 after Washington’s schools announced yet another snow day. “Because of what? Some ice? We’re going to have to apply some flinty Chicago toughness to this town.”

Washington’s new mayor, Muriel Bowser, has shown some unexpected grit, though she has drawn fire for it. On January 6th, just a few days into her term of office, she received complaints that schools and government offices should have opened late after two to four inches of snow fell.

The mayor’s job, she said then, was to keep the city running: “We’re going to open the government.”

Bowser reacted with the same confidence this week when her administration announced on Monday night, as the three to six inches of snow were still falling, that DC’s schools would remain closed on Tuesday. A “snow emergency” was announced the next morning.

The mayor has also faced criticism for flip-flopping. She called a two-hour snow delay on January 14th, fearing heavy falls during rush hour traffic, just 14 minutes after announcing that schools and government would open on time.

In weak-kneed Washington it seems you can’t win.